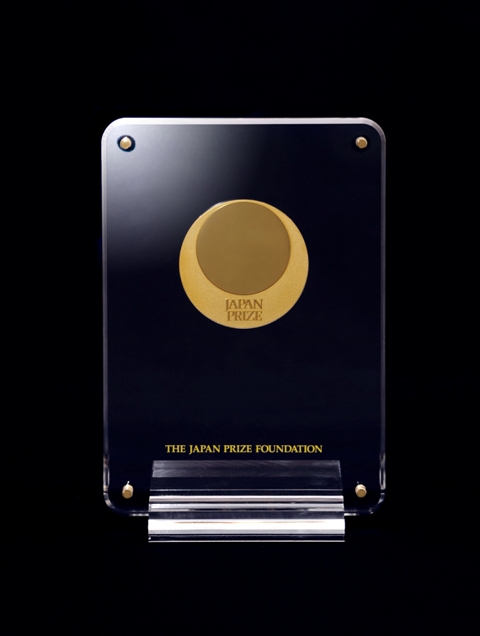 The creation of the Japan Prize was motivated by the Japanese government’s desire to “contribute to the development of science and technology worldwide by establishing a prestigious international award”. Supported by numerous private donations, the Japan Prize was established in 1983 with a cabinet endorsement.
This award honors scientists and researchers worldwide who are recognized for having contributed signifi cantly to the peace and prosperity of humankind through their original and outstanding achievements that have greatly advanced the progress of science and technology.
The eligible fields of this award cover all fields of science and technology. Every year, two fields for the award presentation are chosen by considering the developments in science and technology.
As a general rule, one award is given for each fi eld and each laureate receives a certifi cate of merit, a prize medal and a cash prize.
The Presentation Ceremony is held annually in the presence of Their Majesties the Emperor and Empress of Japan and is also attended by the Speaker of the House of Representatives, the President of the House of Councillors, the Chief Justice of the Supreme Court, and various ministers as well as eminent fi gures from various circles.

The Presentation Ceremony is held in the presence of Their Majesties the Emperor and Empress of Japan in Tokyo every April. The events are also attended by the Prime Minister, the Speaker of the House of Representatives, the President of the House of Councillors, the Chief Justice of the Supreme Court, foreign ambassadors to Japan and about a thousand other distinguished guests, including eminent academics, researchers and representatives of political, business and press circles.

The week in which the Japan Prize is presented is designated as "Japan Prize Week". During this period, the laureates present commemorative lectures and attend academic discussion meetings. Additional activities include a meeting with the Prime Minister and a visit to The Japan Academy.

How the Laureates Are Chosen

Every November, the Field Selection Committee of The Japan Prize Foundation designates and announces two fields eligible for the prize to be awarded two years hence. At the same time, the Foundation calls for over 14,000 prominent scientists and researchers around the world to nominate candidates by the end of the following February.

For each field, the Selection Subcommittee conducts a rigorous evaluation of the candidates' academic achievements and presents the results to the Selection Committee for them to be reviewed from a wider perspective, including their contributions to the progress of science and technology and significant advancement towards the cause of world peace and prosperity. After these evaluations, the selected candidates are recommended for the Prize.

The Selection Committee then forwards its recommendations to the Board of Directors for final decision.

The nomination and selection process takes almost one year after the field are announced. The Japan Prize winners are announced every January, and the Presentation Ceremony is held in mid-April in Tokyo.