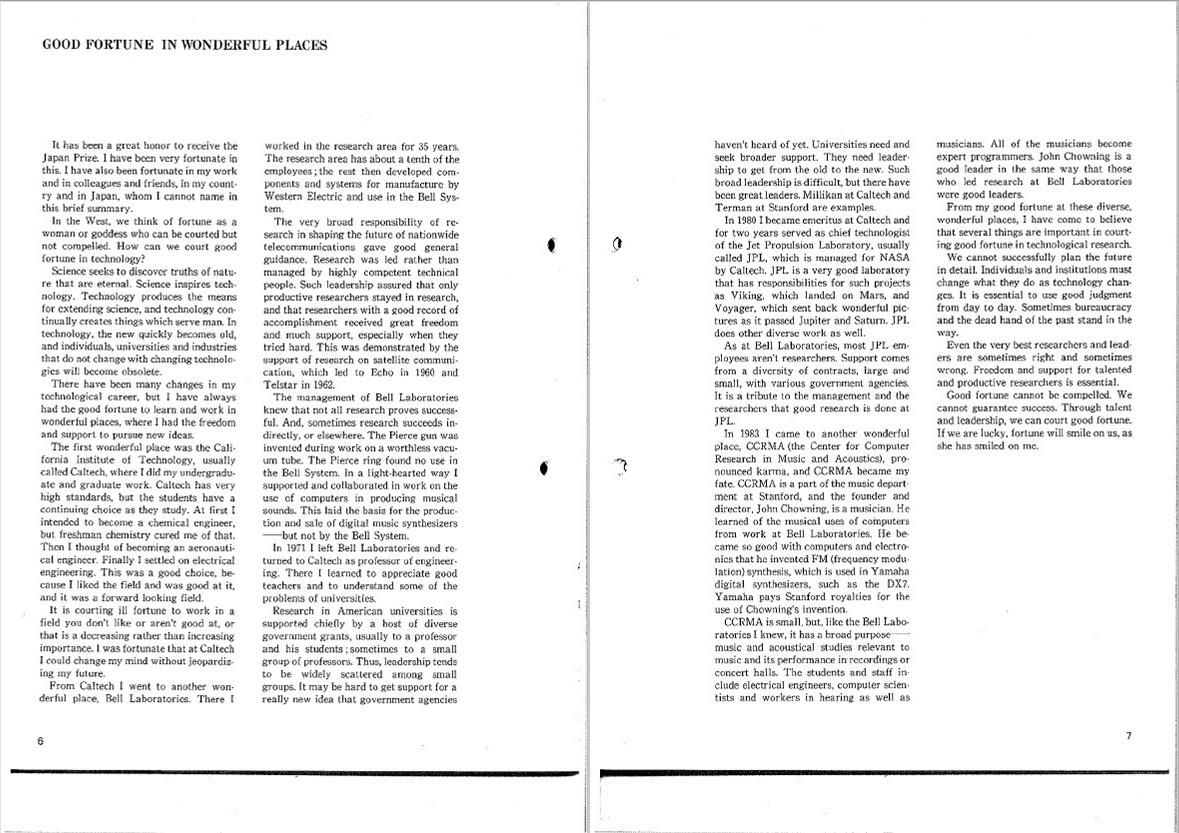 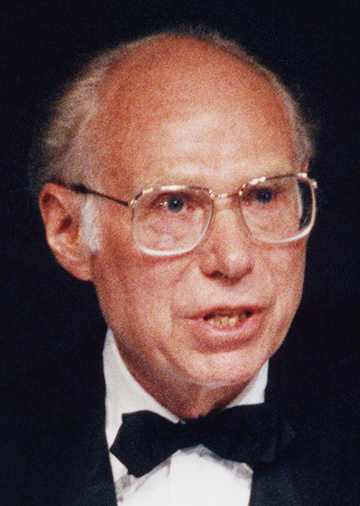 Professor Pierce is not only professor emeritus of the California Institute of Technology, but is also a guest honorary professor of Stanford University, where he is doing research on applying computers to music at the Center for Computer Research and Music Acoustics. Dr. Pierce’s research stretches over wide areas including electronic tube engineering, microwave communications, communications method, and voice and acoustic engineering. He possesses an outstanding foresight for new potential areas of research. And not only has he made brilliant and epoch-making accomplishments in these fields, but he has also succeeded in commercializing the results of his research. When he was doing research on vacuum tubes at the Bell Laboratories, he invented the Pierce Gun as a method for generating a fine beam electronic charge. This invention later helped greatly in commercializing microwave vacuum tubes, called klystron or the traveling wave tubes, which are indispensable to satellite communications and microwave communications.

Dr. Pierce is also credited with having theoretically elucidated the feasibility of communications satellite. He joined forces with his colleagues applying the theory to practice. As a result, the Echo satellite was launched in 1960, and the Telstar satellite in 1962. And it is a well-known fact that the commercialization of today’s satellite communication systems owes to the results of experiments on these two satellites.

Dr. Pierce’s achievements are endless. He was responsible for theoretically elucidating the pulse code modulation and the wide-band digital transmission through multi-value codes; he pioneered in developing digital communications technology; and invented the Pierce Loop, envisioning what we now know as the Local Area Network concept or “LAN.” Research on music and acoustics has occupied many years of his career. He has also studied the physiological mechanism of voice and hearing, and applied the computer technology in analyzing and synthesizing musical sounds.

Dr. Pierce’s original accomplishments are diversified. Some go beyond the areas I have mentioned here. And as I have already said, all his accomplishments reveal his great insight, brilliant mind, as well as his zeal to apply theories to practice.

Dr. Pierce has also published numerous papers, for which he has received a high reputation as being an excellent writer with a clear, logical style. In fact, he is a well-known writer of science fiction. He uses the pseudonym of J.J. Coupling. I am sure his exceptional lucidity as a thinker and writer is something which his students and younger colleagues must want to emulate.

Dr. Pierce is undoubtedly a great contributor to the development of electronic communications engineering in theory, experimentation, and wide application. We believe his accomplishments easily merit the first Japan Prize.