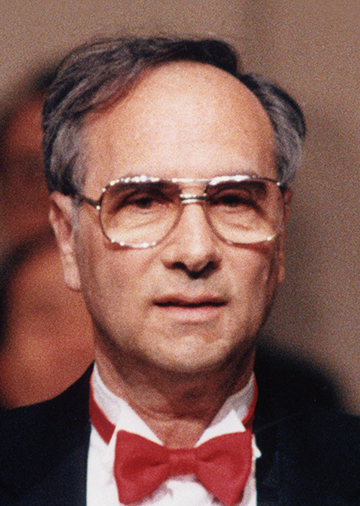 A laser is an oscillator which outputs electromagnetic waves with a very small spread in wavelength. The hard coherence of the wavelength, which produces the output radiation, is linked to a high degree with the optical domain as the wavelength is much shorter than those found in radio or microwaves. In applied optics, lasers are utilized for their powerful light source and in electronics, their power source has a frequency higher, by tens of thousands, than conventional power sources. Electro-Optics was born with the advance of laser technology which combined electronics with applied optics. Lasers have been widely used especially in areas such as optical communications, holography and commercial-use optical discs. In was Dr. Theodore Maiman who first succeeded in developing and demonstrating laser oscillation in May 1960, an achievement attributed to his creative thinking and superior insight.

Dr. Maiman graduated from the University of Colorado and later, under the guidance of Nobel Prize recipient, Professor W. E. Lamb, he received his doctorate for his work on molecular spectroscopy from Stanford University. In 1955, he joined Hughes Research Laboratory and began research on the microwave. At that time, active study of space radiation, astronomy and man-made satellite observations was being conducted in preparation for the International Geology Year in 1957. This period ushered in the dawn of space technology development and the low noise receivers made possible through the development of microwave bands were crucial to the research. Dr. Maiman studied and achieved many favorable results with the maser amplifier, an amplifier which utilizes the ruby crystal and is known for its excellent noise perception. Dr. Maiman later worked with Professor Charles H. Towns at the University of Colorado where he was involved in the theoretical study of lasers and infrared optical lasers. His research focused on the area of low noise microwave amplifiers which used the ruby crystal. He was the first to succeed in producing laser oscillation with this work.

In the three level systems, it was thought impossible to produce a reverse distribution of the different levels with the ruby crystal and the most promise was placed on the neon-helium gas phase laser. Dr. Maiman challenged the accepted theory. He observed the double resonance method of using a combination of microwaves and light which resulted in his development of the pink ruby laser. This laser has a chrome ion content of about 0.05 percent and an excellent flourescent quantum efficiency. To produce this laser, silver is applied to both ends of the cubic ruby crystal and with the use of xenon flash lamp, a Pabbli ferro resonator is produced. The crystal is then inserted into the xenon-flash lamp and with the application of light excitation, laser oscillation is produced.

The birth of the ruby laser brought about a dramatic growth in the research of helium-neon gas lasers, hydro-carbon lasers and semiconductor lasers, among others. These have all materialized thanks to the studies and achievements of Dr. Maiman. Besides the areas of quantum-electronics and electro-optics, lasers have contributed to developments in other areas such as physics, chemistry, astronomy and biology as well as in communications and information processing.

Dr. Maiman has been credited with the development of laser oscillation by using the ruby crystal. As a high output light source, the laser has contributed to the development of non-linear optics such as physical optics. As one example, it was installed on the moon's surface as a reflector by the Apollo astronauts. This reflector emitted a pulse from the ruby laser. By measuring the time for the reflection, the distance between prescribed points on the surface of the earth and the moon could be accurately measured within an error margin of one meter. The reflectors on man made satellites have also made possible the relatively accurate measurement of two remote points on earth. In these respects, the laser has made valuable contributions to the fields of astronomy, physics and geodesy. It is also highly regarded as a tool for nuclear fusion in plasma research and a ruby laser similar to that developed by Dr. Maiman is used in holography and laser radar. In fact, the list of fields and projects which use the ruby laser seems endless.

Along with Louis Pasteur, the Wright brothers and Enrico Fermi, Dr. Maiman is one of the noted few who, during his lifetime, has been named to the National Inventor's Hall of Fame for contributions to science.

A quarter of a century has now passed since Dr. Maiman developed the world's first laser oscillator and its significance has become greater with the passage of time. In recognition of his great contributions, Dr. Maiman was chosen as the laureate for the Japan Prize 1987 in Electro-Optics.