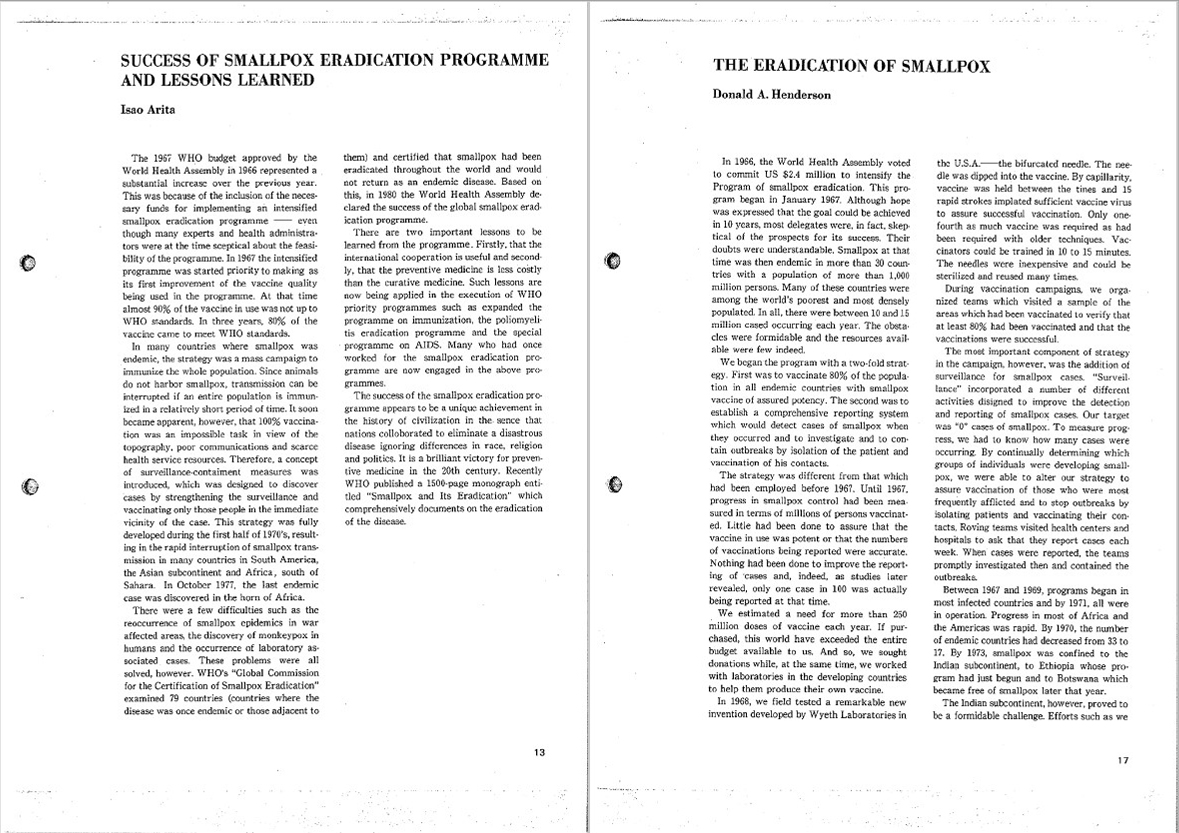 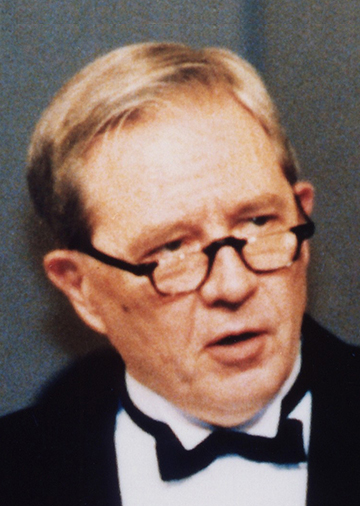 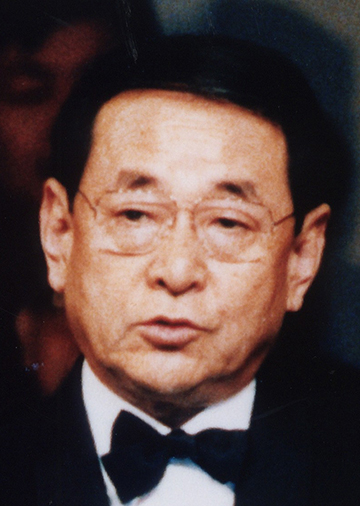 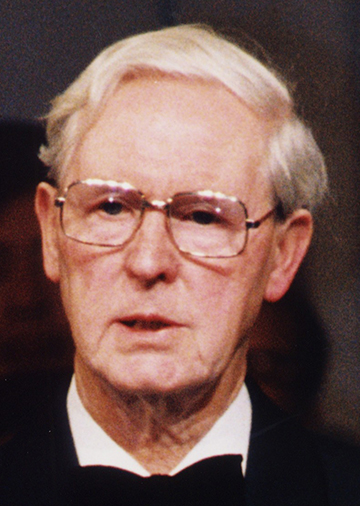 The theme of research, as subject to this year's Japan Prize, is the eradication of smallpox. The history of smallpox goes back thousands of years. For example, the mummified remains of Ramses V (died 1157BC) of Egypt, now in the collection of the Cairo Museum, and other mummies of the same era contain the cicatrice characteristics of smallpox which suggest that the epidemic was already rampant about three thousand years ago.

The discovery of the vaccination against smallpox by Edward Jenner in the early 18th century was an epochal discovery but with the spread of smallpox worldwide, it was almost impossible to control the disease on any great scale.

Smallpox has tormented human beings for at least three thousand years, and until twenty years ago, it was a prevalent disease in 31 countries among 1,200 million people in the world, affecting 15 to 20 million and causing 2 million deaths every year. It was been completely eradicated since the last case in Somalia in October 1977. Its eradication was a memorable achievement in the history of mankind and the three doctors who made this success possible were Dr. Henderson, Dr. Arita and Dr. Fenner.

The smallpox eradication program was proposed and approved by the World Health Assembly in 1957 but its implementation was very difficult.

The intensified smallpox eradication program was again implemented in 1966 with the aim to distribute the vaccine as widely as possible, but this task was also extremely difficult to carry out. There were several reasons: for example, it was necessary for the vaccine to be not only highly effective but also heat-resistant because the areas where the virus was most prevalent were mostly tropical. When the project was started in 1967, however, only about 30 percent of the vaccine available was both effective and heat-resistant.

Also, in order to carry out the eradication project, it was imperative that they be able to monitor and pinpoint the regions where the disease was most prevalent and then immediately transfer this information to the field personnel. However, this was also not a very easy task to accomplish.

These problems were overcome in one area by Dr. Aria who endeavored to establish the basic knowledge necessary for thoroughly carrying out smallpox eradication measures. He performed epidemiological analysis as well as surveys and research of natural hosts of the disease and completed quality improvement and control for the vaccine.

Dr. Henderson dedicated his efforts to the development of group vaccinations for countries where smallpox was in evidence and also organized the education and training of personnel taking part in this work. Since 1970, the two doctors frequently travelled in turn to areas throughout South America, Asia and Africa to give guidance to the field workers who were engaged in the smallpox eradication program as well as to help solve technical, social and political problems often arising in those countries where the program was implemented.

Dr. Fanner is originally a virologist whose research achievements are internationally known through theses and books. He constantly evaluated the progress of the smallpox eradication program as part of his research and guided the thorough implementation of the program.

Thus the smallpox eradication program made rapid progress and with the last patient in Asia recorded with the disease in 1975, came the fruitful results of Dr. Henderson's first objective. Dr. Aria directed and managed the last world eradication program in the North East region of Africa. During this time, he thought that the traditional method of vaccinating the entire population was not as effective as vaccinating inhabitants in limited affected areas. By implementing the latter method, he succeeded in the "containment" of the spread of smallpox. As a result, on October 26, 1977, the history of the natural spread of smallpox came to an end with the patient in Somalia being the last on record.

Dr. Arita continued to direct a worldwide smallpox surveillance program with the focus on confirmation of the disease's eradication in 79 danger areas. The contribution of Dr. Fenner in this surveillance and the eradication confirmation project also is great. Since such a task of preventative medicine has a great influence socially, a further deliberate ten-year observation period continued and in 1987 the eradication of smallpox was finally confirmed.

This achievement is a grand world-scale experiment that has proved for the first time that it is possible to eradicate one of mankind's most dreaded parasitic diseases. The exercise has been epochal in the annals of virology.

Also this achievement not only accomplished the eradication of smallpox but has established a basis for designing world-scale plans to eradicate or prevent the spread of other virological diseases and new epidemics. Also it made a breakthrough for future preventative medicine to create vaccines which recombine genes of protective antigens from other pathogenic bacteria to control an epidemic for which man previously had no methods of treatment.

The above is an abridged text of the report outlining the basis for awarding the Japan Prize.