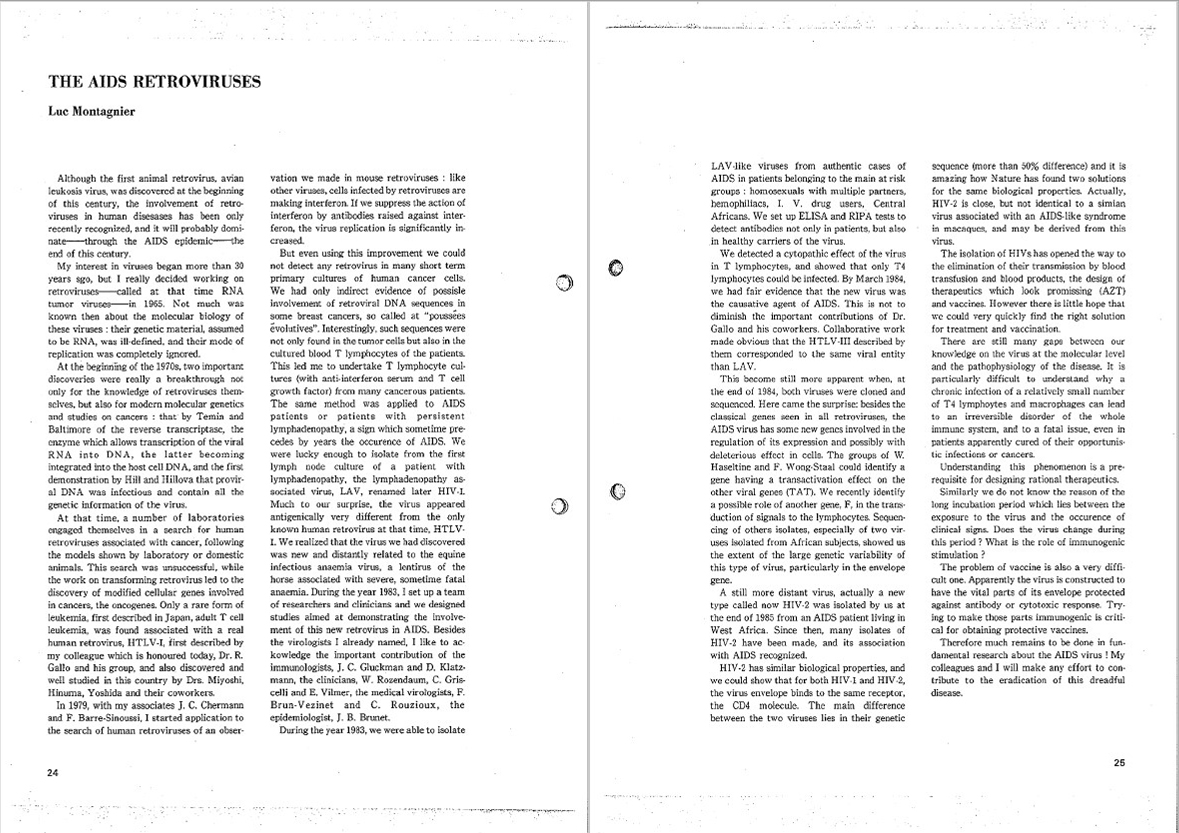 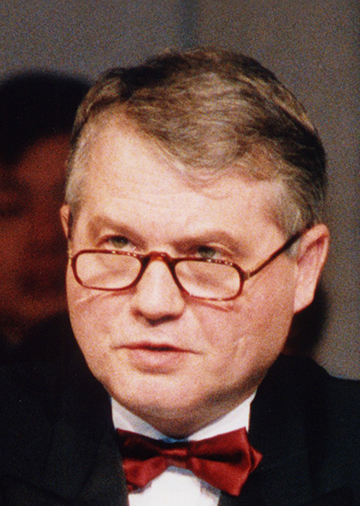 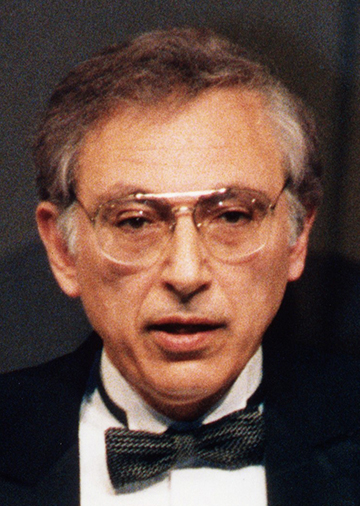 The theme of research, as subject to this year's Japan Prize, is the discovery of HIV, the pathogen behind AIDS (acquired immune deficiency syndrome) and the development of its diagnostic methods.

AIDS was classified as an independent disease in 1981-82 in the United States. The disease causes a severe breakdown of the body's immune system leaving it defenseless against infections by even ordinary bacillus or weak pathogens and the mortality rate of its victims is high.

Both Dr. Montagnier and Dr. Gallo discovered HIV and respectively clarified its virological nature and course of infection. In addition, practical blood serum diagnostic methods were developed for the establishment of basic preventive counter-measures by the easy recognition of virus carriers and infected blood and plasma.

Dr. Montagnier conducted several creative research studies mainly in the fields of virology and cancer before this research. Especially noted is his discovery made in 1964 in joint research with Dr. McPherson. It is the original study on the soft agar colony which is still used as the most important index in the examination of cancer-bearing cells.

Dr. Montagnier was the first to isolate the HIV-1 or the AIDS virus in 1983, while leading the joint researchers of the Pasteur Institute. The virus was first called LAV (Lymphoadenopathy Associated Virus) because it was discovered in a Lymphoadenopathy patient, but it actually was the prototype of HIV-1. Later Dr. Montagnier showed that the Helper-T cell was the target. While researching AIDS in Africa, Dr. Montagnier made several discoveries such as the development of the ELISA method for diagnosing the mother-child infection of HIV and its antibody, the discovery of T4 antigen-the receptor of HIV, followed by the discovery of HIV-2 and associated viruses of a different antigen type, the gene cloning, etc.

Dr. Gallo, on the other hand, had made two great achievements related to AIDS research. One was the discovery of TCGF or IL-2. With information on the TCGF, the culture of the T lymph globe was pinpointed leading to progress in the study of HIV. His second great achievement was the separation of the HIV-1 from the T lymph cell growth which is recognized as the first retrovirus separation in man. This served as a great influence on later research in human retroviruses.

The first of the achievements which was highly evaluated for the Japan Prize was the analysis of the relation on HIV with AIDS. His achievements further include the presentation of many useful T cell roots, the detection of viruses in saliva and semen, the explanation of the course of infection, the analysis of the virological nature of HIV, the cloning and analysis of provirus DNA, etc. In addition, the production and supply of the single clone antigen against HIV, and the research and development of AZT which is currently recognized as the most effective remedy against AIDS are also achievements of Dr. Gallo's group.

As described above, the two doctors, leading their own groups, discovered HIV and respectively clarified its virological nature and course of infection. In addition, practical methods to diagnose the virus in blood serum were developed for the establishment of basic preventative countermeasures to ease recognition of healthy carriers and blood infected with the AIDS virus.

Further they paved the way for the development of a vaccine through the gene cloning of provirus DNA. They are also gaining remarkable results in their efforts to develop antivirus medicine. Further, it has become possible to almost completely prevent infection by transfusion or blood serum by examination of blood donors and serum.

However, the remaining problems may be the establishment of actual preventative methods and the containment of the disease in society at large. As to the latter, the development of a vaccine is thought to be possible through the achievements made in gene cloning experiments and the verification of neutralizing reaction made by the two doctor's groups. Efforts in development are the only key, it is believed.

We believe both Dr. Montagnier and Dr. Gallo both deserve to be awarded the Japan Prize for 1988.