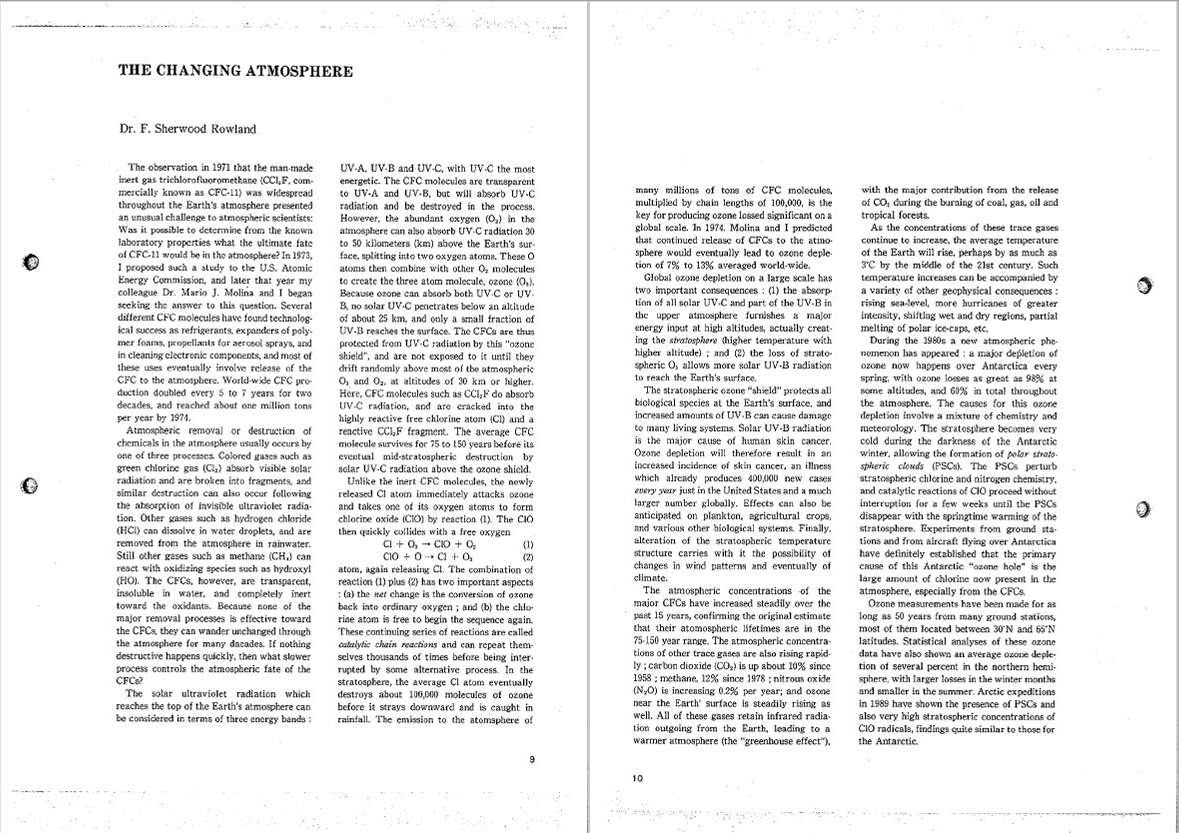 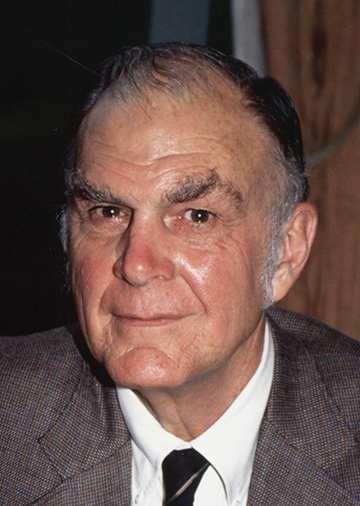 Profesor at University of California, Irvine

The theme of the research which was awarded this year's Japan Prize is the mechanism of stratospheric ozone depletion by chlorofluorocarbons.

Depletion of the stratospheric ozone layer by manmade chlorofluorocarbons has become a cause for deep concern. International cooperation has begun to protect the earth's environment against this threat. Chlorofluorocarbons are a group of very stable compounds composed of carbon, fluorine and chlorine, which are called 'flons' commercially in Japan.

The destructive effect of chlorofluorocarbons on the stratospheric ozone layer which shields the earth from harmful ultraviolet radiation was first predicted by Prof. F. S. Rowland of the University of California, Irvine. In 1974, Dr. Rowland determined that the only important atmospheric removal process for chlorofluorocarbon molecules widely used as aerosol propellants and refrigerants is photodecomposition in the midstratosphere by solar ultraviolet radiation. These decompositions release chlorine atoms which initiate a catalytic chain reaction, removing stratospheric ozone. He predicted that continued emission of these compounds at the then-current rates would eventually result in a 7-13% loss of the total ozone. In addition, these atmospheric decomposition processes are estimated to take place so slowly that any environmental changes caused through accumulation of chlorofluorocarbons could persist throughout the 21st century.

Dr. Rowland's theoretical prediction of stratospheric ozone depletion by chlorofluorocarbons has been essentially validated by the facts obtained by his own research group as well as other scientists. The NASA Ozone Trends Panel concluded in 1988 that total ozone had decreased by a few percent since 1969 and that the massive losses of stratospheric ozone over Antarctica (the "ozone hole") is caused primarily by anthropogenic chlorine compounds.

Loss of the stratospheric ozone permits increased penetration to the earth's surface of the solar ultraviolet radiation with attendant deleterious effects on man and many other biological systems. Preferential loss of ozone in the stratosphere will lead to reduced ultraviolet absorption there and a consequent decrease in the temperature of the stratosphere with potential further climatic effects. Furthermore, with intense infrared absorption, chlorofluorocarbons accumulated in the troposphere exacerbate the greenhouse effect expected from carbon dioxide alone. Accordingly, an international plan for control of chlorofluorocarbons (the Vienna Convention and the Montreal Protocol) has been formulated by UNEP to protect the stratospheric ozone layer against such adverse effects. According to the Montreal Protocol, the control of production and consumption of these compounds will start this coming July in most industrialized countries.

Dr. Rowland discovered and estimated theoretically, with profound insight, the possible impact on the ozone layer by chlorofluorocarbons. In addition, he has been the leader for more than a decade in promoting studies on the mechanisms of ozone depletion. In the meantime, his own research group has made very important contributions. Beside his outstanding scientific achievement, Dr. Rowland has made continuous, vigorous efforts to prevent depletion of the earth's critical ozone layer by forcefully communicating the problem to scientists, to the general public, and to officials in many countries. He is highly acclaimed for his great contribution to protection of the future of mankind and the atmosphere.

As described above, we believe that Dr. Rowland deserve to be awarded the Japan Prize award of 1989 for the field of Environmental Science and Technology.