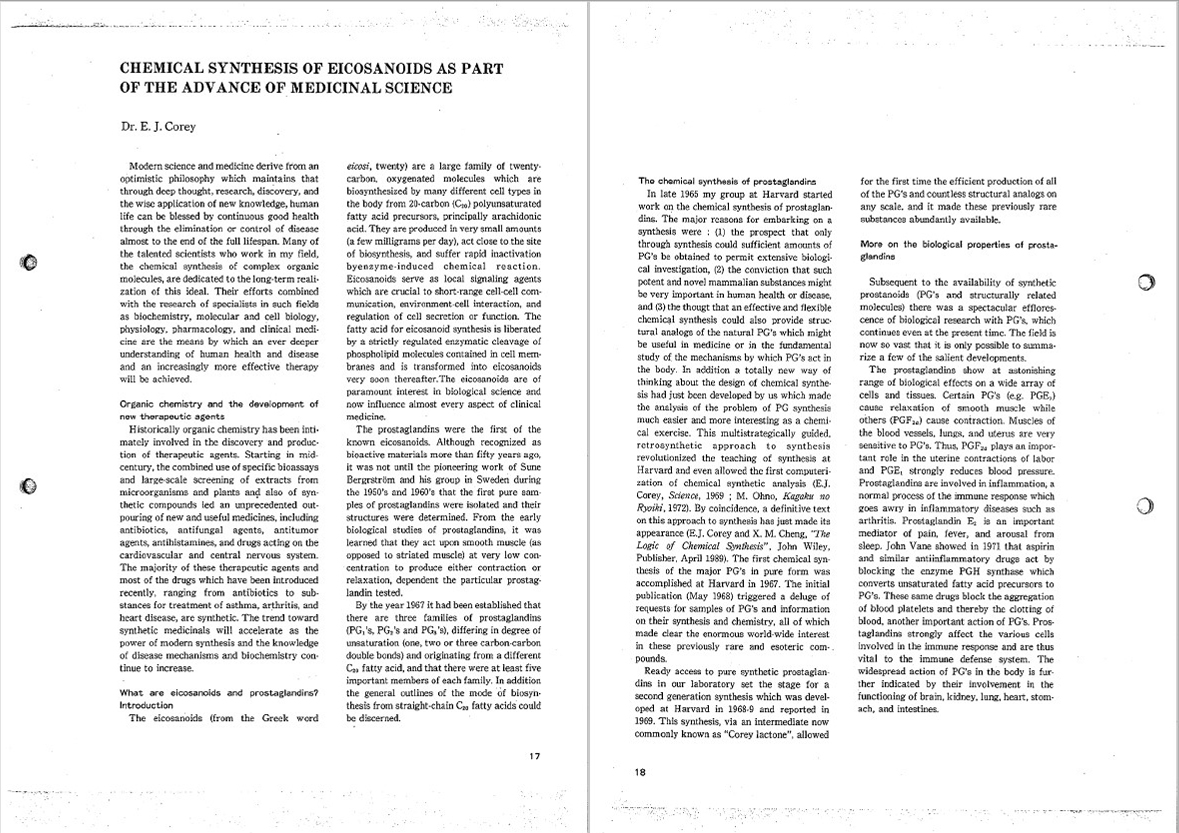 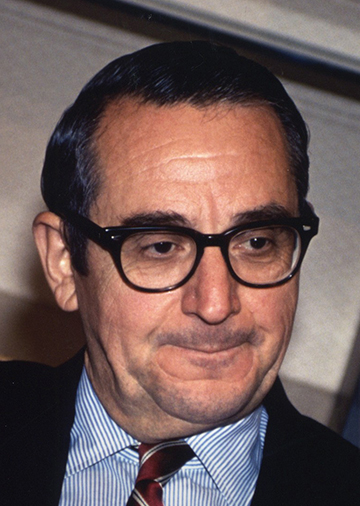 Professor Elias J. Corey graduated from the Massachusetts Institute of Technology in 1948 and earned his Ph.D. degree there in 1950. Immediately after that, he took up a teaching position at Department of Chemistry, Illinois University, by his predominant ability, and then professorship in 1956 at the age of 27. In 1959 he accepted an offer to be professor of organic chemistry at Harvard University, and since 1965 he has been Sheldon Emery Professor of Chemistry at Harvard.

Especially in his extensive works on total syntheses of biologically active natural products, Professor Corey has shown his creative originality establishing synthetic strategies and introducing new methodology skillfully designed on the basis of the structures of the target compounds. His numerous works discovering novel synthetical methods and useful chemical reagents have given great and continuous impacts to the thinking of organic chemists and medicinal chemists worldwide.

The citation for the present award is based on Professor Corey's marverous achievements concerning recent synthetic studies on the biologically active compounds involved in the arachidonic acid cascade such as prostaglandins, thromboxanes, prostacyclines and leukotrienes.

The discovery of prostaglandins goes back to 1935 when Dr. von Euler at Karolinska Institute in Sweden proved the presence of a biologically active substance in ram prostate gland tissue (actually in seminal vesicule as shown later), which had previously been suggested by Dr. Kurzrok, a gynecologist in New York, as a factor in human seminal fluid contracting or relaxing uterus. After 15 year interruption due to the World War Ⅱ, Dr. Bergstrom and Dr. Samuelsson at Karolinska Institute isolated prostaglandins E1 and F1α in pure forms in the 1950s, and with the help of newly developed chromatographical techniques and spectroscopic structural analyses their chemical structures were established in 1962.

The biosynthetical scheme of the arachidonate metabolites (or eicosanoids) has been elucidated. At present the occurrence of numerous eicosanoids isolated from various organs and tissues has been proved, and their chemical structures have been established.

The biosynthetical pathway of those compounds along multiple ways starting from a single initial precursor, arachidonic acid, has been illustrated like as a cascade to be named the arachidonic acid cascade.

The eicosanoids are produced in living organs and tissues in a very minute amount (only about 1mg in total per day in a human body) and their half-life time is very short (30 sec.~ 5 min.) to convert them into inactive substances.

In the 1970s Dr. Vane in England found that aspirin and some other non-steroidal anti-inflammatory agents inhibit a part of biosynthetical pathway of prostaglandins, and isolated prostaglandin I2 (PGI2) from hog aorta microsome.

Furthermore, several biological activities of prostaglandins have been known, such as vasodilating activity in PGE1, which is effective against a severe peripheral vascular disease (Buerger Disease); vasodilating effect and labor inducing action in PGE2; antiplatelet aggregation action and blood pressure depressing effect in PGI2; sleep inducing activity in PGD2; anti-tumor effect in PGJ2. On the other hand, platelet aggregation activity of thromboxane A2 and inflammation inducing activity of leukotrienes have been observed.

For these medical and physiological contributions, Drs. Bergstrom, Samuelsson and Vane were awarded the Nobel Prize in 1982.

For the biological investigations and medical applications, a large scale of chemical syntheses of the prostaglandins was urgently required, since they had been available only in a very minute amount from the natural source.

Professor Corey tackled this problem with all his activity in organic synthesis and successfully achieved in 1968 the first synthesis of major prostaglandins in pure optically active forms. Subsequently he improved the synthetical process to make the stable supply possible and exclusively contributed to the investigations of mechanism of the biological activities of prostaglandins.

Since then, the syntheses of eicosanoids have been investigated by several organic chemists in the world, and more than 1,000 papers have been published for this subject, but no other synthetical method can compete with Dr. Corey's synthesis in terms of (1) efficiency, (2) versatility (various types of prostaglandins can be induced from a mutual intermediate so-called Corey's lactone) and (3) economical value (his synthesis is extremely stereoselective in affording only the desired PGF2α out of 128 possible stereo-isomers).

At present prostaglandins and their congeners are being produced by more than ten pharmaceutical companies throughout the world, most of which are more or less applying Corey's synthesis. This fact reveals the outstanding superiority of Professor Corey's work.

In 1977 he deduced the correct structure for an unstable substance now called leukotriene A4 and synthesized it (1979) before it was found to be the direct precursor of the leukotriene family of eicosanoids. Thus the science of arachidonic acid cascade has been established on the basis of the chemical syntheses accomplished by Professor Corey.

As mentioned above, Professor Corey's achievement in the synthesis of eicosanoids is a great monumental work in modern medicinal science.