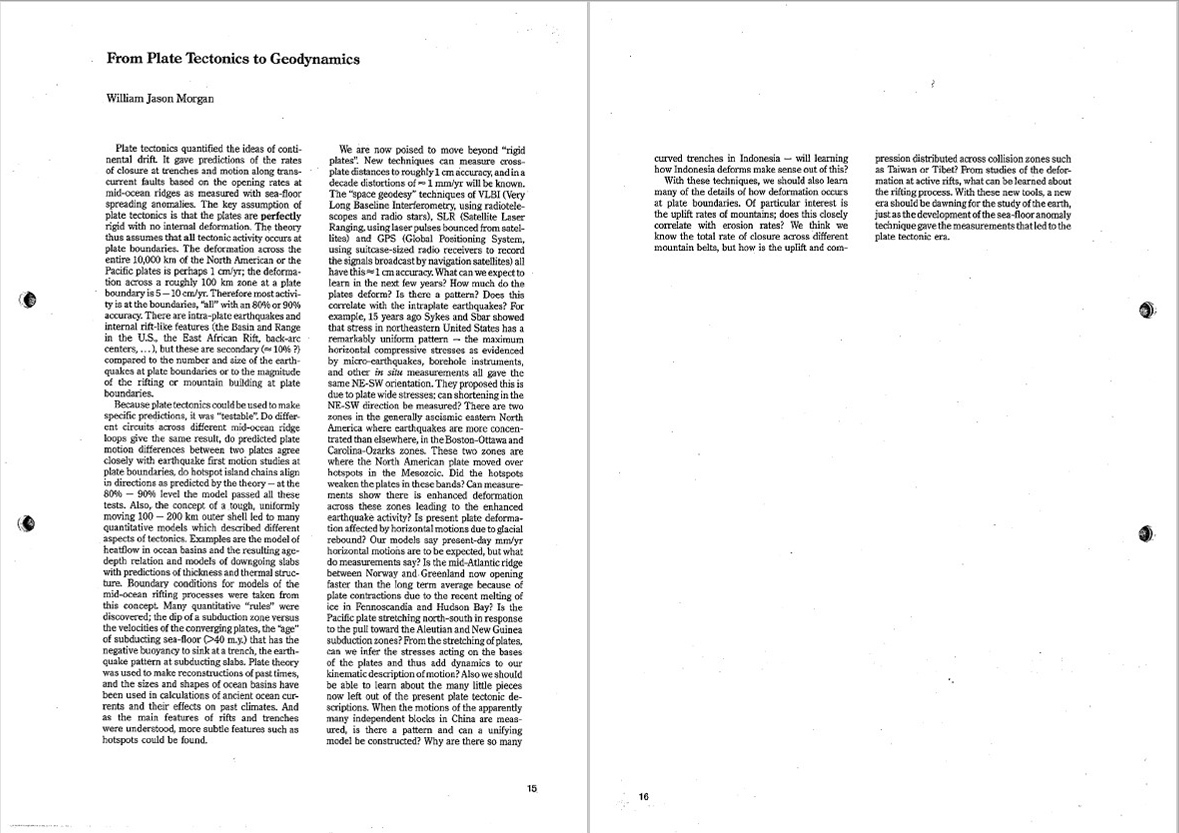 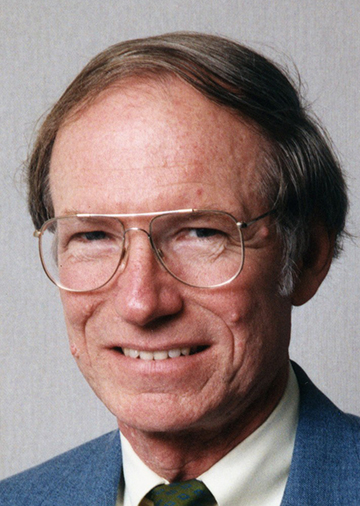 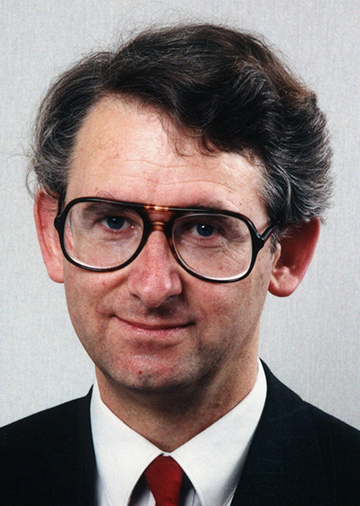 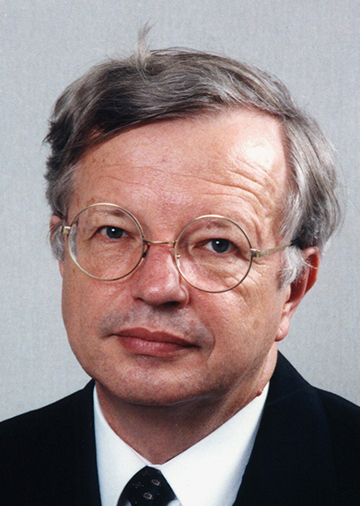 During the last 20 years, the theory of plate tectonics has lead to revolutionary progress in solid earth sciences. Dr. W. J. Morgan of Princeton University (U.S.A.), Dr. D. P. McKenzie of Cambridge University (U.K.), and Dr. X. Le Pichon of the Ecole Normale Superieure (France) have played a major role in initiating and developing this theory. According to the plate tectonics theory, the Earth's outer shell consists of a relatively small number (about 20) of rigid plates moving with relative velocities of several centimeters per year. Major geological processes and phenomena such as earthquakes, volcanic eruptions, and mountain building occur near the boundaries between these plates as a result of their relative movement. Many other geological phenomena can also be understood in terms of the movement of plates. The theory of plate tectonics has for the first time enabled earth scientists to interpret numerous geological phenomena in the framework of a consistent global-scale model, and it has become a guiding principle throughout research in earth sciences. The theory of plate tectonics has thus contributed greatly not only to our science, but also to the benefit of human society through its impact in fields such as energy exploration, mineral resources exploration, and in the prediction of earthquakes and volcanic eruptions.

Dr. Morgan began work by dividing the outer shell of the Earth into around 20 plates. He analysed their movements using information on the direction of fault displacements associated with earthquakes, directions of transform faults, and magnetic patterns in the ocean floor. From their relative motion, he found that the plates behave as rigid, rotating segments of the Earth's outer shell. Furthermore Dr. Morgan also measured absolute velocities of plate motion using the concept that hot spots within plates, observed as long-standing volcanoes, are "fixed" to the mantle and do not move with respect to the plates. Through the work of Dr. Morgan, mid-oceanic ridges, subduction zones and transform faults can be interpreted to result from plate movements. Hence the importance of the concept of plate tectonics became widely recognized. Dr. Morgan's work has triggered numerous subsequent studies following his original concept.

Dr. McKenzie has analysed earthquake mechanisms in the circum-Pacific region and has demonstrated independently that the floor of the Pacific ocean moves as a single plate, rotating against the North American and East Asian continents. In collaboration with Dr. Morgan, Dr. McKenzie has also carried out a geometrical analysis of triple junctions where three plates meet, and their work has contributed greatly to understanding the relative motion of plates and the energetics of plate movement. Dr. McKenzie proposed the highly original model that large sedimentary basins, important in the formation of oil and natural gas deposits, are formed by thinning of the crust due to plate motion. Furthermore, Dr. McKenzie has conducted important work on the influence of mantle convection on plate movement and heat transfer in the mantle, and on magma transport and genesis of mid-oceanic ridge basalts.

Dr. Le Pichon, stimulated by the work of Dr. Morgan, has independently determined plate movements over the entire surface of the Earth, using ocean floor spreading velocities estimated from the paleomagnetic patterns and the directions of transform faults. As examples, the results indicated that the velocity of subduction of the Pacific plate at the Japan trench is 8-9 cm per year and that the Eurasian and Indian continents continue to shorten by 5-6 cm per year. Dr. Le Pichon's results explained the observed geological phenomena well and demonstrated the power of the theory of plate tectonics. Dr. Le Pichon subsequently published a book on plate tectonics which has had a great influence on earth scientists throughout the world. Furthermore, he has played a major role in sea-floor investigations (with submersible crafts) at plate boundaries such as the Japan trench. Through these works, Dr. Le Pichon has contributed greatly to understanding of the geological nature of plate boundaries in the ocean.

The plate tectonics theory was not created independently. It is based on many important contributions by previous investigators. Notable examples include the theory of continental drift by A. Wegener, and subsequent theories of mantle convection and sea-floor spreading. Observational works such as topographic studies of the ocean floor, paleomagnetic studies, and seismic investigations in mid-oceanic ridges and subduction zones have also played major roles. Nevertheless the truly outstanding work by Drs. Morgan, McKenzie and Le Pichon has been fundamental to the development of the theory of plate tectonics, and can be regarded as perhaps the most important contribution to the earth sciences in modern times.

Drs. Morgan, McKenzie and Le Pichon have indeed made a very great contribution to the theory of plate tectonics. They are still conducting pioneering works in earth sciences.