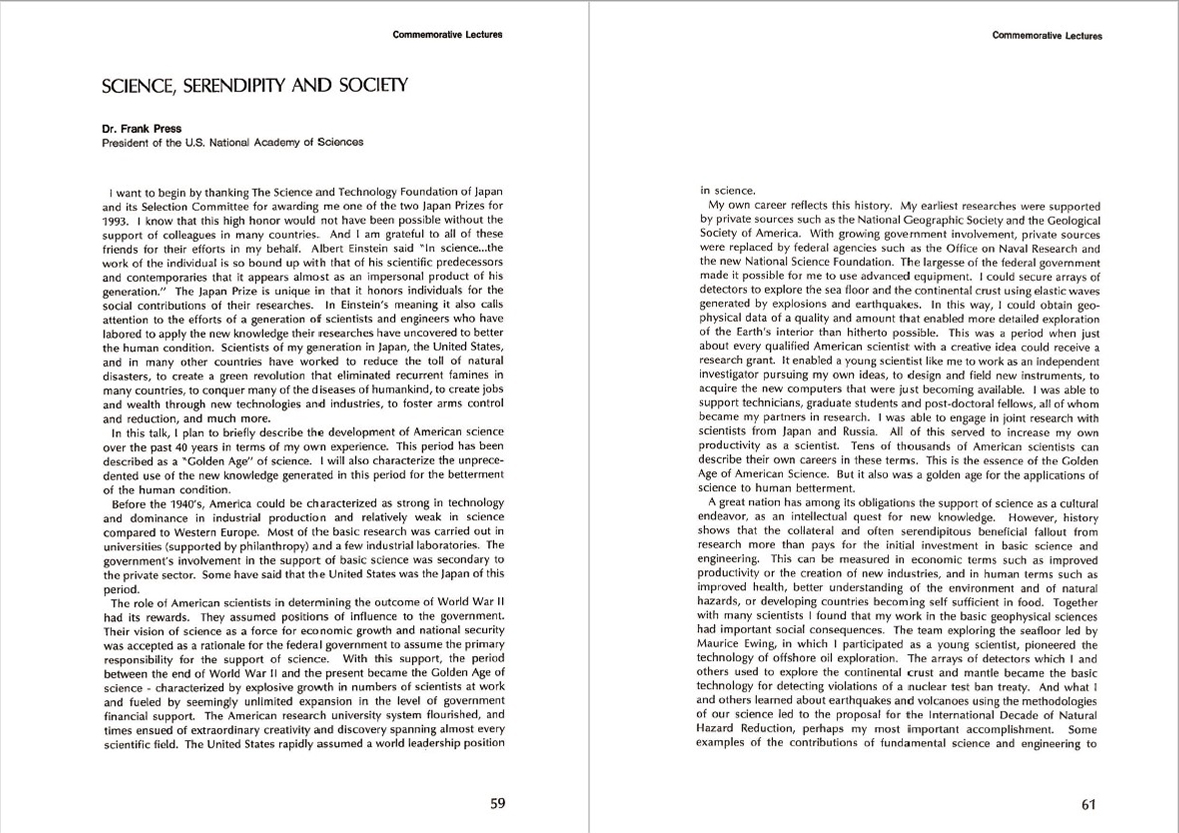 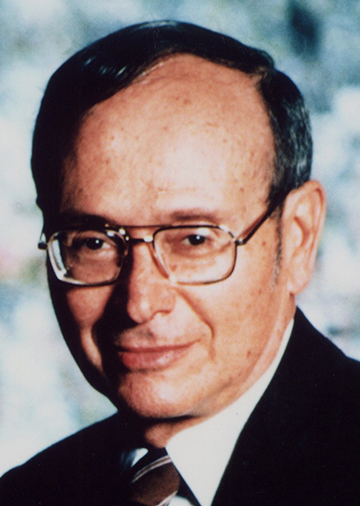 Dr. Frank Press is an outstanding geophysicist. He has made substantial contributions to modern seismology by putting forward new information on the earth's interior based on the scientific interpretation of various phases in complicated seismic waves. He was the first to propose that the dispersion of long period earthquake surface wave motion could be used as a tool for studying the structure of the earth's crust and upper mantle. Dr. Press verified by the analysis of surface waves that the occurrence of an earthquake is fault motion itself. It was the beginning of modern seismology and the forerunner for studies on earthquake mechanisms.

Dr. Press helped bring about the international Geophysical Year (IGY) 1957-1958. the first worldwide attempt to measure and map various geophysical phenomena. During the IGY, instruments known as the Press-Ewing Seismographs were installed at ten places all over the world, which became the origin of the Worldwide Standardized Seismograph Network (WWSSN), whose records are still providing important data for the studies of earthquake mechanisms and earth's interior.

In 1982, Dr. Press was given the Medal of the Seismological Society of America for his achievements in seismology at an age 14 years younger than any of the previous awardees. He holds 28 honorary degrees including those from such prominent universities as Princeton and Columbia. Mount Press in the Antarctica was named for his long-term contributions to geophysics.

Dr. Press joined Columbia University's faculty in 1952 and three years later was appointed professor of geophysics at the California Institute of Technology. He joined Massachusetts Institute of Technology in 1965. In 1977, Dr. Press was appointed President Carter's science adviser. He was elected President of the US National Academy of Sciences in 1981 and reelected to a second six-year term in 1987.

Dr. Press exercised supreme leadership to promote the cause of scientific research and development in the area of disaster mitigation. He was instrumental in initiating the US national program in earthquake prediction. As demonstrated by his efforts for IGY and WWSSN, he recognized the importance of international cooperation in disaster sciences. He conceived the International Decade for Natural Disaster Reduction (IDNDR), a UN program in which the international community under the auspices of the United Nations will pay special attention during the last decade of the century to fostering international cooperation in the field of natural disaster (such as earthquakes, floods, droughts, volcanos, landslides, windstorms and wildfires) reduction. He chaired, tirelessly, the ad hoc group of scientific and technical experts during the preparatory period before IDNDR officially and successfully started in 1990.

As described in the above, Dr. Frank Press has made substantial contributions not only to the development of modern seismology, but to the advancement of international cooperation in the mitigation of the impacts of natural disasters and thus to peace and prosperity of all mankind.

We believe that Dr. Frank Press truly deserves to be awarded the Japan Prize of 1993.