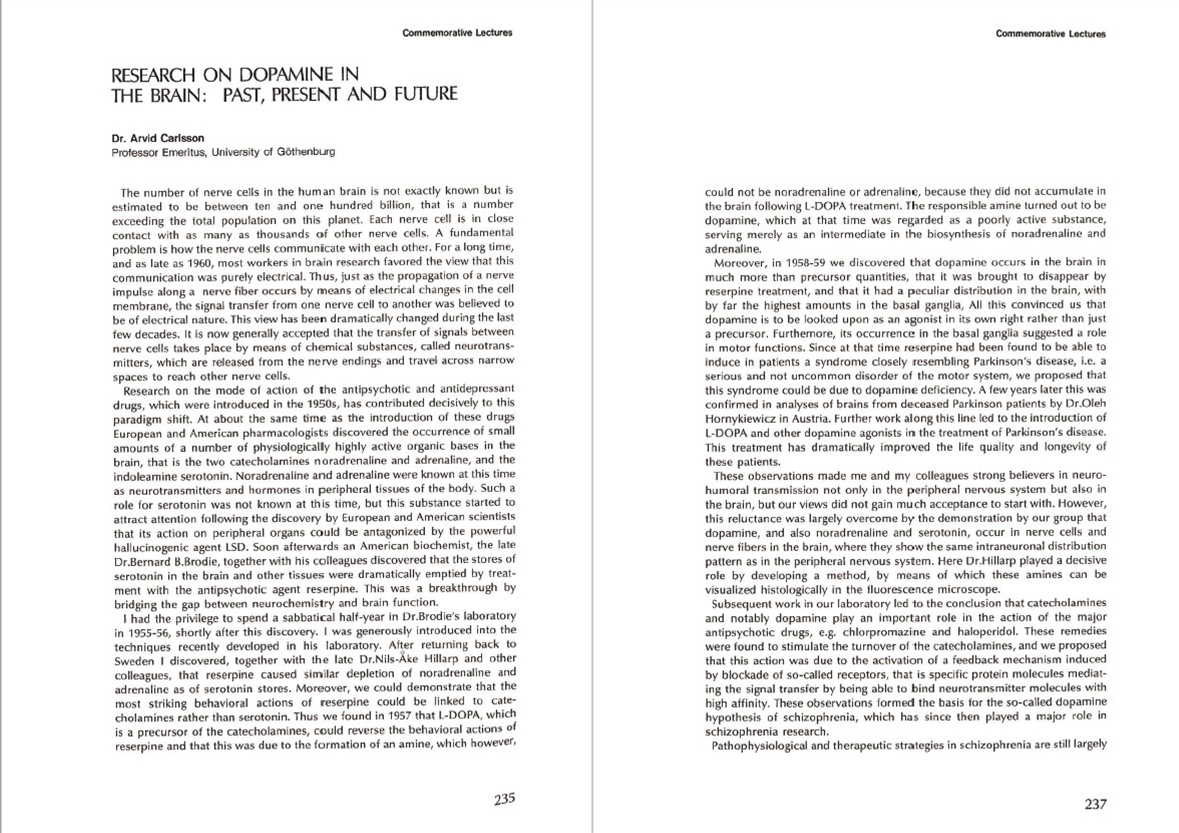 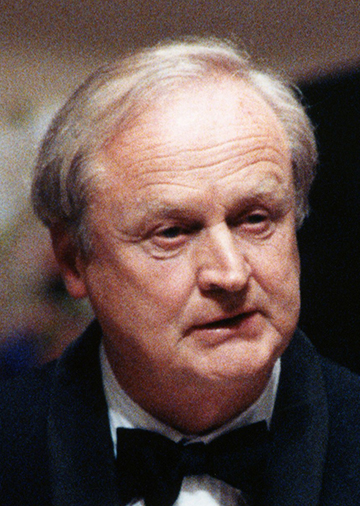 Dr. Arvid Carlsson is an outstanding neuropsychopharmacologist. He has made substantial contributions towards the clarification of the functions of monoamines, especially dopamine, in the brain. His work on dopamine goes back to 1957, when he discovered the dramatic reversal of reserpine-induced akinesia and sedation by DOPA, which is a direct precursor of dopamine. In 1958, Dr. Carlsson found that dopamine serves a critical agonist function in the regulation of psychomotor activity. This was the first evidence that dopamine acts as a neurotransmitter in the brain. This led to a new understanding of the role of dopamine in motor functions, especially in Parkinson's disease, which could for the first time be treated efficiently, as well as its role in mental functions and in the actions of psychotherapeutic drugs.

Dr. Carlsson has continued research activities in the dopamine field over the past thirty years. From 1952, many neuroleptic (antipsychotic) drugs have been used clinically to treat schizophrenia but it was not known how they worked. In 1963, Dr. Carlsson, together with Margit Lindqvist published the first evidence that neuroleptics act by blocking dopamine receptors, by demonstrating increased dopamine turnover after treatment with neuroleptics, chlorpromazine or haloperidol. This facilitated the development of many new drugs for the treatment of psychoses, and leading to the “dopamine hypothesis” of schizophrenia.

Functions of dopamine neurons are also modulated by autoreceptors. The term “autoreceptor” was coined by Dr. Carlsson in 1975. Working with medicinal chemists, he developed a new class of agonist and antagonist compounds with preferential action on dopamine autoreceptors. Among them, Dr. Carlsson found the antagonists which have central stimulating effects with high affinity to D3 subtype of dopamine receptors which, by other scientists, have been cloned recently and found characteristic distribution in limbic areas known to be associated with cognitive, emotional and endocrine functions.

In 1988, Dr. Carlsson presented a modified hypothesis of schizophrenia, which suggests that the sensory input is regulated by feedback loops involving the cerebral cortex, the striatal complexes, and the thalamus. Recently, Dr. Carlsson and Maria Carlsson have discovered interactions of catecholamines with glutamatergic and cholinergic systems, leading to dramatic changes in the responsiveness of postsynaptic dopaminergic and α2 adrenergic receptors. These studies shed new light on schizophrenia as a putative transmitter imbalance syndrome and also open up new therapeutic strategies for Parkinson's disease.

In summary, Dr. Carlsson has been an international leader in the field of neuropsychopharmacology for three decades. His original and unique discoveries in the dopamine research have led to a new understanding and new effective treatments for two of the most serious brain diseases known to man : Schizophrenia and Parkinson's disease.

Dr. Carlsson has made substantial contributions to the development of modern psychology and psychiatry from the field of neuropsychopharmacology.

We believe that Dr. Arvid Carlsson truly deserves to be awarded the Japan Prize of 1994.