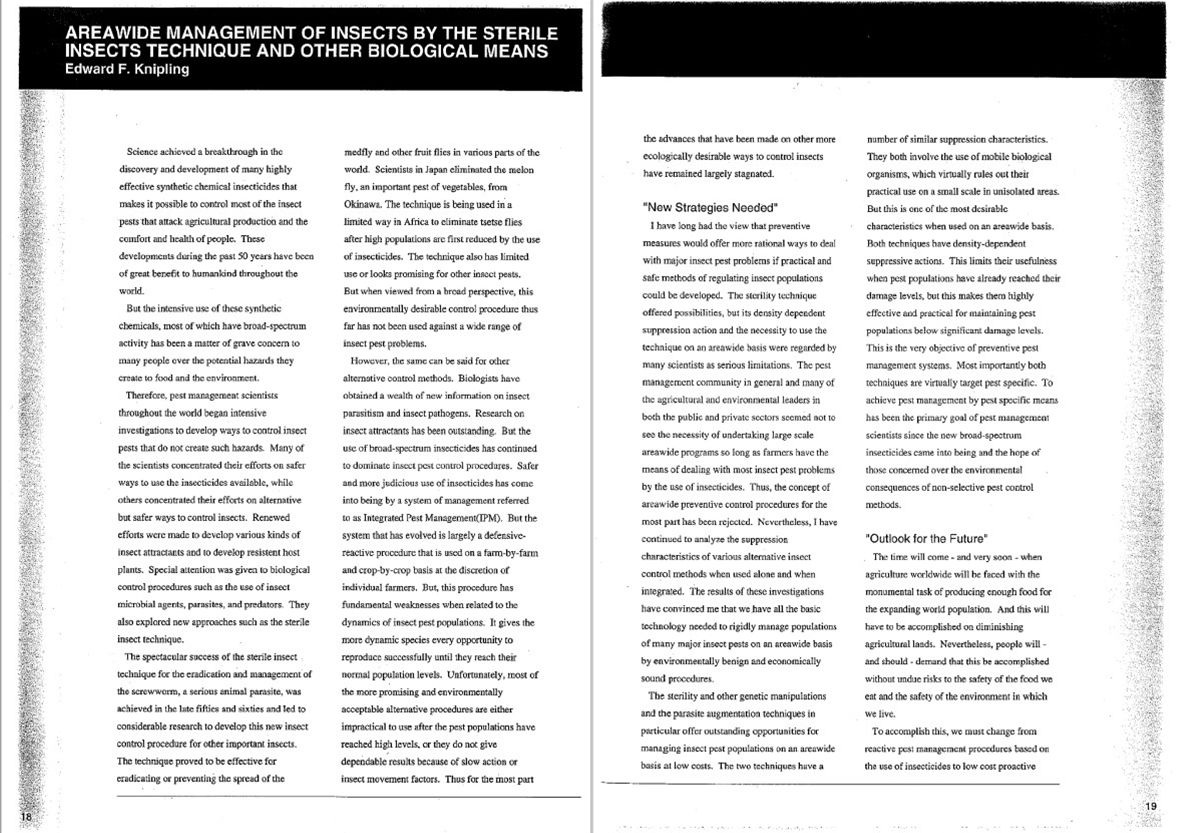 For more than 60 years, since he graduated from Texas A&M University in 1930, Dr. Knipling has been actively engaged in research works and its applications. He is a distingushed agricultural entomologist. Dr. Knipling has proposed truly original idea of environmentally friendly pest control by suppressing the insect population in agricultural crops and domestic animals.

He demonstrated the efficacy of his method against harmful insect by his enormous perseverance. Accordingly, he made outstanding contributions to the improvement of food production.

Dr. Knipling started his entomological research on insect pests affecting livestock at the United States Department of Agriculture (USDA) in 1931. He developed a new concept of insect pest control known as the “Sterile Insect Release Method”. In the 1950's he attained great success in eradicating the screwworm fly, a serious and sometimes fatal pest of livestock (cattle, sheep) in the United States and Mexico.

This method is based on sterilization by radiation of massproduced pupae of the files and subsequent repeated release of them into the insect population in nature. The target pest insect is eliminated due to the interruption of reproduction by sterile mating. This completely biological control method is remarkably successful in eradicating pest outbreaks over a restricted geographical area. It is possible to achieve complete protection against damage to agriculture by insect pests. In addition, non-targeted insects and also animals are not affected by this control method based on the species ? specific mating behavior of target insects.

Dr. Knipling's method was applied in Japan by the Ministry of Agriculture, Forestry and Fisheries in collaboration with Okinawa and Kagoshima prefectures. The melon fly, which inflicted serious damage on fruit and vegetables, was successfully eradicated in Okinawa in 1993. Presently, large programs are in progress in many countries against such harmful insects, menacing to human and animal health, as the tsetse fly and the anopheles mosquito as well as other insect pests.

From the 1980's onward, as insecticide contamination of the environment and the problem of chemical residue in fresh food became serious issues, sustainable biological methods such as Dr. Knipling's Sterile Insect Release Method received renewed attention and support.

From 1953 Dr. Knipling held successively important posts in the USDA relating to programs on control of insects affecting both man and animals. He made important contributions to the development of an environmentally sound method of insect pest control. He not only promoted the application of the Sterile Insect Release Method against various insect pests, but he also proposed and played a key role in promoting Integrated Pest Management as the best way to improve both food production and the environment. This concept is based on the reduction of the target insect population to below a standard level of economic significance in terms of potential damage.

In summary: Dr. Knipling's pioneering contributions in the development of Integrated Pest Management by the Sterile Insect Release Method had a great impact in the field of agriculture. He played a leading role in scientific research and in applications of his findings in terms of pest control without harming the environment. His impact on human well-being and prosperity through increased food production has been enormous. We believe that Dr. Knipling truly deserves to be awarded the 1995 (11th) Japan Prize.