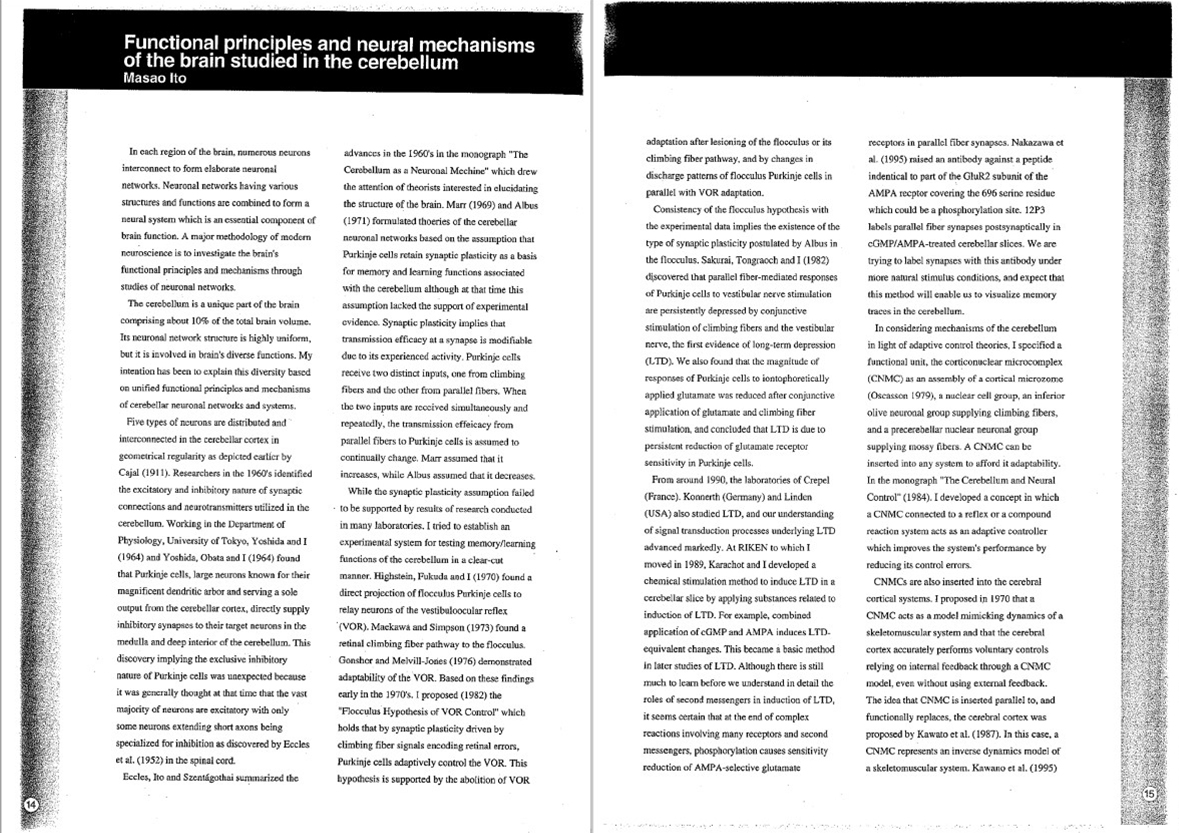 Dr.Masao Ito was born in Nagoya,Japan. He graduated from The University of Tokyo School of Medicine and received his M.D.in 1953 and his Ph.D.in 1959. As his doctoral dissertation,he worked out the electrical activity of spinal ganglion cells with intracellular microelectrode. During his postdoctoral training in Dr.john Eccles' laboratory at the Australian National University (1959-62) he studied the ionic permeability of inhibitory post-synaptic membranes of spinal motoneurons and established the theory that the ionic permeability depends on the size of hydrated ions.

From 1962 he systematically analyzed the neuronal circuits of the medulla and the cerebellum at The University of Tokyo School of Medicine and discovered the inhibitory action of the cerebellar Purkinje cells. At that time, it was believed that only intemeurons with short axons exhibited an inhibitory action in the spinal cord and brain, and no one imagined that the Purkinje cells, which are the big projection neurons that provide sole output from the cerebellar cortex, exhibited an inhibitory action upon the target neurons. Thus his discovery had great impact on our understandings of the mechanism and role of inhibitory synapses in the spinal cord and brain. He also found, in collaboration with Dr. Kunihiko Obata, that the chemical transmitter substance that mediates Purkinje cell inhibition is r -aminobutyric acid. This finding established the fact that r -aminobutyric acid acts as a chemical transmitter substance in vertebrate central nervous systems. Then he accomplished a series of systematic researches on cerebellar neuronal circuits, the results of which were published in the book "The Cerebellum as a Neuronal Machine" (Springer-Verlag, 1967) co-authored by Drs.Eccles and Szentagothai.

In 1970 he found that a part of the cerebellum, the flocculus, has a direct connection with a basic reflex circuit, the vestibulo-ocular reflex. Further analyses of this connection led his proposal in 1972 of a hypothesis that the flocculus is the center for adaptive control that modifies the dynamics of the vestibulo-ocular reflex by means of error signals from the retina. This hypothesis states that the cerebellum functions as a device that provides reflexes with adaptability, and opened a new era of research on the cerebellar mechanisms. Thereafter he and his colleagues succeeded in proving this hypothesis by various experiments. These achievements elucidated the general principle of mechanisms of cerebellar motor learning for which he was awarded the Fujiwara prize in 1981.

In 1984 he published a book "The Cerebellum and Neural Control" (Raven Press,New York), wherein he compiled knowledge on the structure and function of cerebellar neural circuits and formulated general pninciples along which the cerebellum works. Then he conjectured that these principles are applicable to higher brain functions, such as cognition, and provided a theoretical basis for recent noninvasive methods of measurement of human brain activity. It is now generally accepted that the cerebellum plays an important role both in motor and cognitive functions.

In 1989 he moved to the Frontier Research System in the lnstitute of Physical and Chemical Research (RIKEN) and organized new laboratories to study molecular processes of the long-term depression. He and his collaborators elucidated roles of intracellular second messengers such as cGMP that lead to phosphorylation of glutamate receptors. Using knowledge from molecular/cellular research, they succeeded in inducing a reversible learning deficit by temporally inactivating the long-term depression. This achievement is the first direct demonstration of a causal relationship between the cerebellar long-term depresssion and motor learning. He has been President of both the Neuroscience Society of Japan and the Physiological Society of Japan for many years and, since 1994, has taken on the important responsibility of promoting the whole field of scientific research as President of the Science Council of Japan. He has also served as President of the International Brain Research Organization and the International the Union of Physiological Sciences. He has been elected to the Japan Academy, Royal Society, Royal Swedish Academy of Sciences, Armenian Academy of Sciences and Russian Academy of Sciences.

As described,Dr.Ito's achievements which uncovered the design of the brain through analyses of structure and function of neural networks have been truly outstanding, creative and the most successful representation of modem neuroscience research. In conclusion, Dr. Masao Ito is a meritorious recipient deserving the 1996 (12th) Japan Prize.