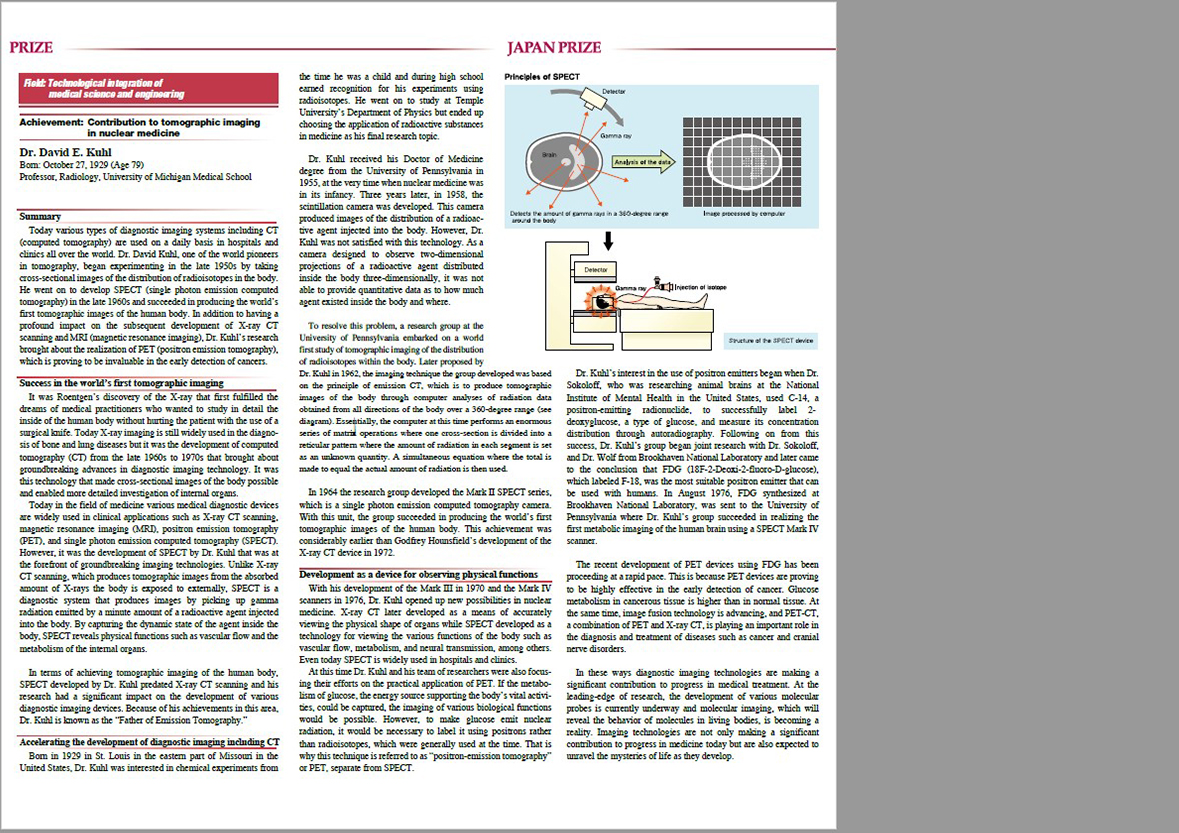 In the late 1950s, Dr. David Kuhl developed a novel method of tomographic imaging of the distribution of radioactive isotopes in the body. A University of Pennsylvania group that he headed developed a series of SPECT (single photon emission computed tomography) devices-the Mark II in 1964, the Mark III in 1970, and the Mark IV in 1976. The group also advanced the medical use of tomographic image reconstruction based on numerical computation, and made the transaxial section tomography of a living body possible for the first time in the world. They improved tomographic image quality, and proved their clinical efficacy for image separation in brain tumors and stroke. In the mid-1960s, Dr. Kuhl succeeded in the axial transverse tomographic imaging of humans. This was well before the development of X-ray CT by Dr. Hounsfield, and the technology had an enormous impact on the development and evolution of various methods of computer tomography, including positron emission tomography (PET).

In the early 1970s, Dr. Kuhl measured regional cerebral blood volume using the reconstructed tomographic brain images of radioactive isotopes obtained by his SPECT scanner. This was the first time that physiological functions of a living body had been measured three-dimensionally. It opened a new road in nuclear medicine, from the quantitative evaluation of the regional cerebral blood flow and metabolism, which is extremely important in the field of cerebral circulation and pathophysiology, to scientific research such as neurophysiology, neuroscience, and behavioral science.

During roughly the same period, Dr. Louis Sokoloff of the National Institute of Mental Health discovered that autoradiographic imaging using the β-ray emitting radionuclide 14C-deoxyglucose was effective for evaluating regional metabolic functions in animal brain. Aiming to employ this technique clinically, Dr. Kuhl’s group conducted joint research with Dr. Sokoloff and with Dr. Alfred P. Wolf of the Brookhaven National Laboratory, ultimately reaching the conclusion that 18F-fluorodeoxyglucose (FDG) was the most appropriate positron-emitting tracer for human use. On August 16, 1976, FDG was synthesized at Brookhaven and transported to the University of Pennsylvania, where it was used, with the SPECT Mark IV, to successfully image the metabolism of the human brain for the first time. Subsequently, FDG came to be widely used throughout the world as a radiotracer for PET imaging of the brain, the heart, and the tumors. It played a pivotal role in the spreading of PET.

At present, PET and SPECT have become indispensable in clinical medicine. Moreover, through fusion of these images with X-ray CT and MRI, their usefulness as integrated image information has been increasing as well. The radionuclide medical imaging achieved through the development of various molecular probes, which is now called molecular imaging, is expected to make great advances with the active future development in basic and clinical research.

Dr. Kuhl, who has been called the father of emission tomography, has greatly contributed to the development of tomographic imaging in nuclear medicine, and is thus deemed most eminently deserving of the 2009 Japan Prize given to honor contributions to "Technological integration of medical science and engineering."