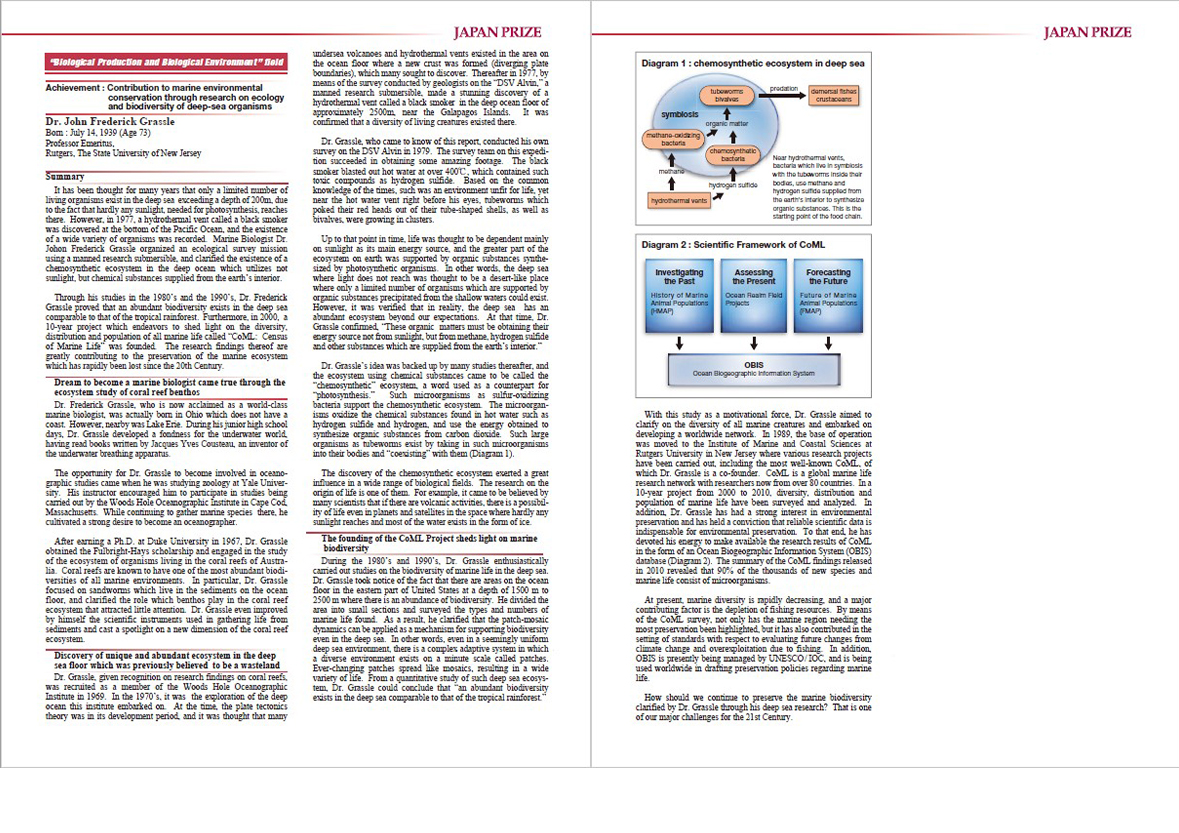 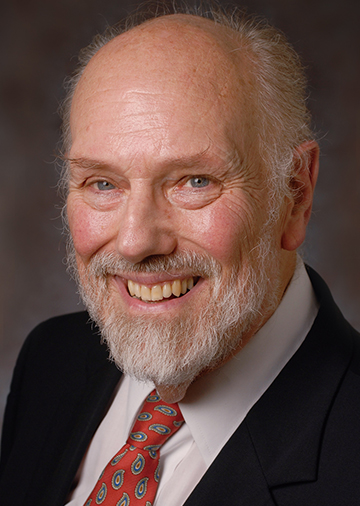 In the challenging research area of deep-sea ecosystems, Dr. Grassle established the basis for modern deep-sea ecological studies that utilizes the latest technologies, such as a manned submersible, for on-the-spot observation and analysis. His research efforts have contributed profoundly to the overall elucidation of mechanisms that create and support high biodiversity in the ocean.

Dr. Grassle's most notable research finding is the elucidation of chemosynthetic ecosystems. In the 1970s, geologists discovered ecosystems near deep-sea hydrothermal vents. These deep-sea ecosystems consisted of various unknown species, and their biomass was over a thousand times larger than that of the surrounding environment. Upon receiving this report, Dr. Grassle organized a comprehensive team to carry out a research expedition. The team discovered that this ecosystem was supported by sulfur-oxidizing bacteria, which could produce organic matter using the chemical energy resulting from oxidation of hydrogen sulfide dissolved in hydrothermal vent fluids. Following this discovery, similar ecosystems were found all around the world. This led to a new understanding of marine ecology in which non-photosynthetic and photosynthetic ecosystems were both recognized as important.

Dr. Grassle also discovered that in the deep ocean, archibenthal zones at depths of about 2,000 m are particularly high in biodiversity. From this discovery, he proposed the "patch mosaic hypothesis", which suggested that even superficially similar deep-sea environments actually contain many different microhabitats, each of which hosts a unique set of species. He then verified this hypothesis by carrying out experiments in the deep sea where he successfully measured colonization of organisms in azoic sediments. This also led to the quantitative evaluation of deep-sea biodiversity on a global scale, through which Dr. Grassle estimated that there are as many species of polychaete annelids as there are insects.

This research became the starting point for Dr. Grassle to lead establishment of the Census of Marine Life (CoML), a project to elucidate the diversity of all marine species. By 2010, CoML had grown into a massive project with more than 2,700 members from 80 different countries, conducting research in marine waters around the globe and resulting in a succession of additional projects. Being a passionate environmental conservationist, Dr. Grassle believes that credible scientific data gathered through the CoML project is essential for the conservation of marine ecosystems. He therefore devoted himself to making the research findings publically available through the Ocean Biogeographic Information System (OBIS) database. Today, OBIS is managed by UNESCO IOC, and is used around the globe for planning ocean conservation policies.

Dr. Grassle, who furthered marine biodiversity research and established the scientific basis for marine environmental conservation on a global scale, is thereby deemed most eminently deserving of the 2013 Japan Prize given to honor contributions in the field of "Biological Production and Biological Environment".