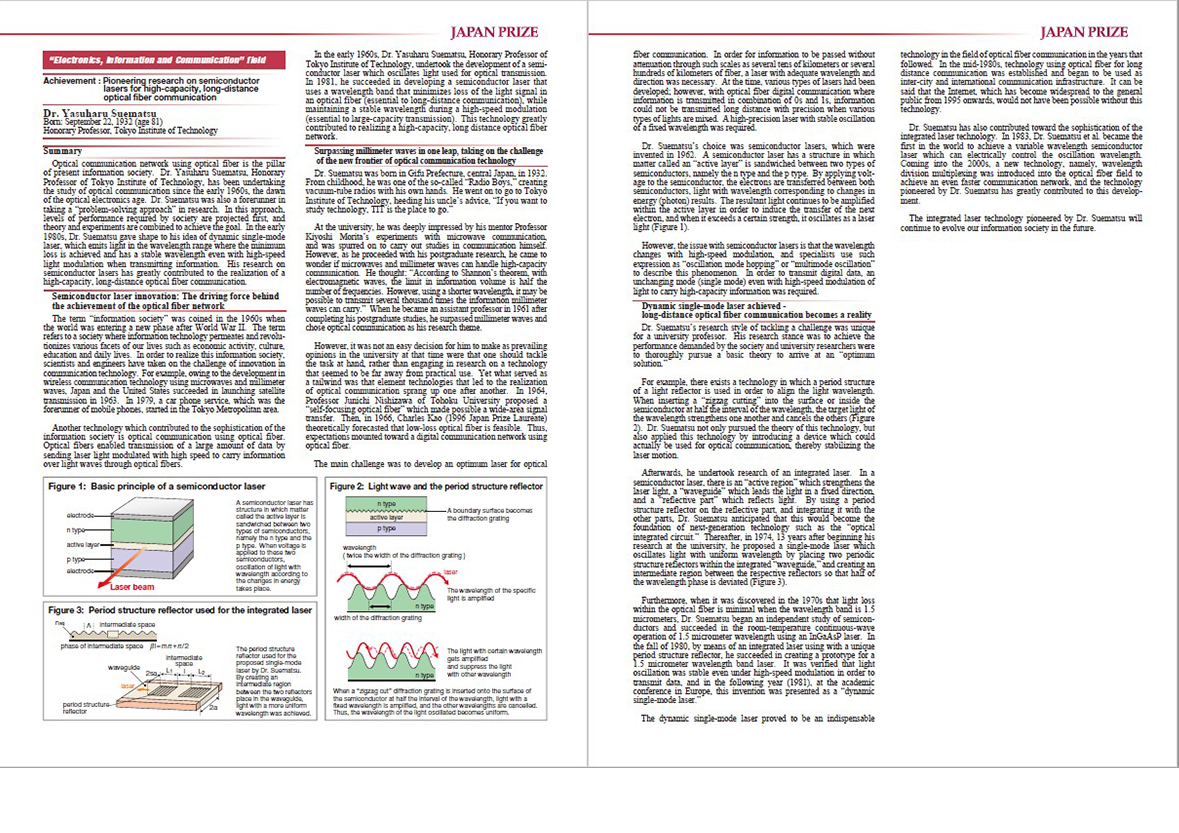 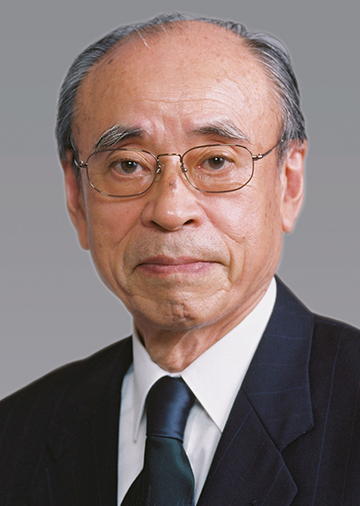 Dr. Yasuharu Suematsu pioneered the way for high-capacity long-distance optical fiber communication, which is the core technology in our information networks, especially the Internet. It was realized through the development of semiconductor lasers capable of operating with optical fibers at a wavelength band having low transmission loss, as well as operating with stable wavelength under high-speed modulation.

The prosperity of the Internet would not have been possible without the high-capacity long-distance optical fiber transmission system using combination of light sources, which can generate high-speed modulation optical signal, and low-loss optical fiber, which can transmit optical signal across long distances. Despite the demonstration of semiconductor lasers in 1962 and the prediction of the nature of low-loss property of optical silica fiber in 1966, scientific and technological breakthroughs were still needed to establish the core technologies for such transmission systems. In particular, semiconductor lasers at the time were not applicable for such systems due to the instability of the lasing wavelength under rapid output power modulation to generate information signal.

From early on, Dr. Suematsu was proposing a high-performance transmission system using optical fiber. He identified the requirements of lasers and led the development of semiconductor lasers for high-capacity long-distance optical fiber transmission from an engineering approach, covering a wide range of disciplines from theory to materials. In 1974, Dr. Suematsu proposed the integration of reflectors with phase-shifted periodic structures into semiconductor lasers, which led to the concept of dynamic single-mode lasers having stable lasing wavelength even under high-speed modulation. He also realized in 1979, the room-temperature continuous-wave operation of InGaAsP lasers in the 1.5-μm band, the wavelength range with lowest loss in the optical fiber.

In 1981, he combined these technologies and achieved the room-temperature continuous-wave operation of an InGaAsP laser integrated with phase-shifted reflectors in the 1.5-μm band, thereby becoming the world’s first to demonstrate dynamic single mode operation. Before his achievement, realization of integrated lasers was considered technologically too difficult, however, his efforts finally opened up the way for high-capacity long-distance optical fiber communication. Dynamic single mode lasers have become the standard for light sources in present-day high-capacity optical fiber transmission systems in overland cables and intercontinental submarine cables.

Today, there is an ever-growing demand for high-capacity long-distance optical fiber communication, which has now become a part of our social infrastructure. It is expected that the future growth in the capacity of optical transmission systems will not only benefit ordinary communications and video transmissions, but will also lead to the dissemination of new systems in our society, such as telemedical services with real-time transmission of ultra high-resolution video.

Anticipating the future requirements, Dr. Suematsu combined theory and experiments to open up a new paradigm in semiconductor lasers. Furthermore, his approach in achieving dynamic single-mode operation at the optical transmission wavelength was an excellent example of how an engineering research should be. As a result, he has made indispensable contributions to forming the foundation of today’s information society. Dr. Suematsu’s pioneering research achievements are thereby deemed most eminently deserving of the 2014 Japan Prize given to honor contributions in the field of “Electronics, Information and Communication.”