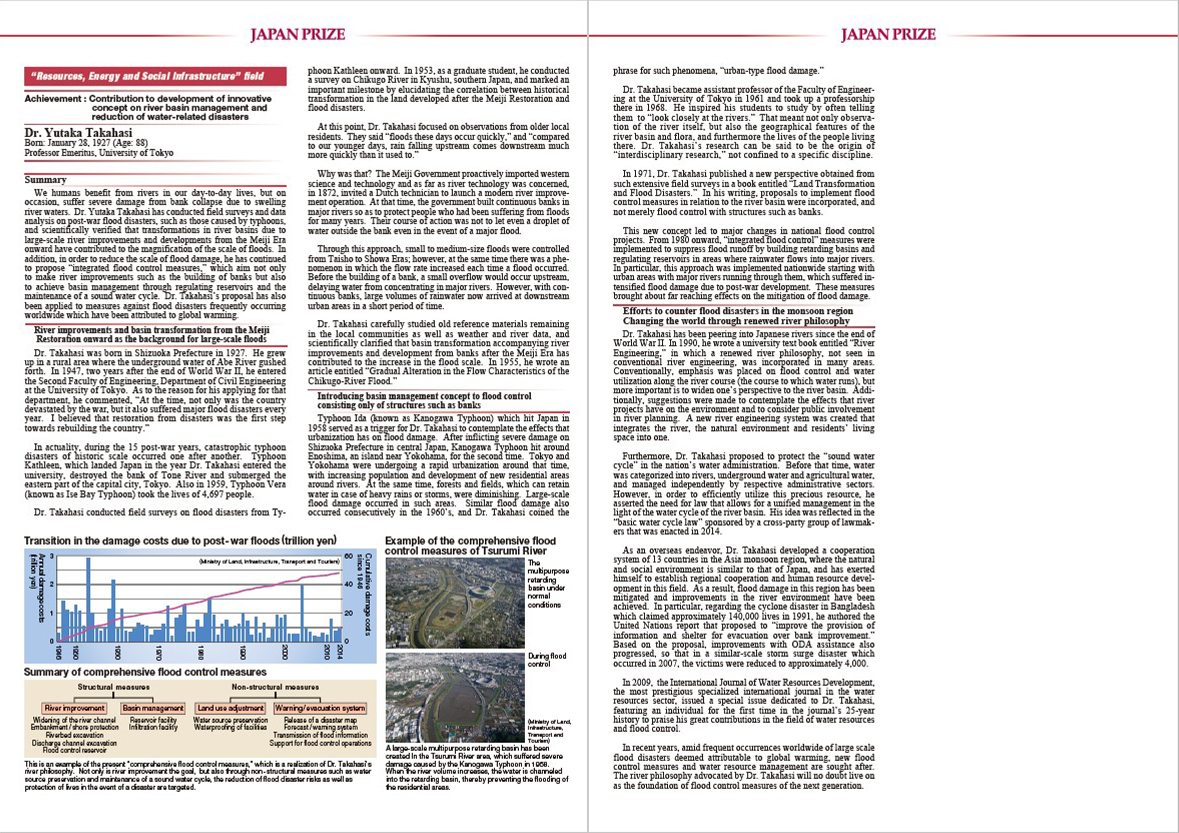 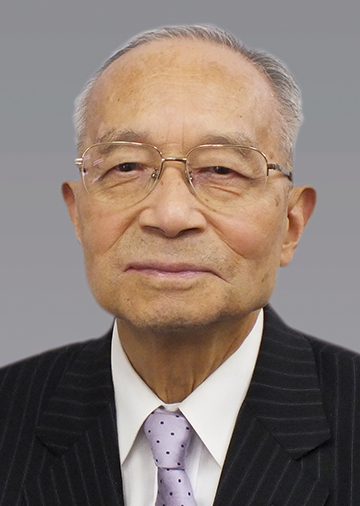 By conducting extensive fieldwork and data analysis on floods since the mid 1940s, Dr. Takahasi scientifically proved that the increase of flood discharge in Japan is due to the change of river basins by urbanization and the construction of levees from the Meiji era onward. From the findings, he drew his attention to the relation between water-related disasters and society, and in his publication “Transformation of National Land and Water-related Disasters” (1971) proposed that river improvement policies should be pursued in consideration of the river basin, rather than focusing only on physical infrastructure such as banks as had been the case traditionally.

Furthermore, in his book “River Engineering” (1990), Dr. Takahasi pointed out the importance of taking into consideration historical and environmental aspects of river and hydrological cycle as well as public involvement in river planning, and established a new field of river engineering that incorporates flood control, water resources and environment, thereby leading to an innovative concept of water-based national land management. This laid the foundation for the 1997 amendment to Japan’s River Act, which not only added the concept of the water environment to traditional flood control and water resources, but also included provisions for public involvement, and went on to produce significant results by invoking the national government to take action. Even today, this River Act is known as one of the most advanced river-related legislations in the world.

In overseas, Dr. Takahasi built a cooperative framework with participation from 13 countries in the Asian monsoon region, where the environment and the social structures are similar to Japan, and dedicated himself to fostering regional cooperation and development of human resources. As a result, those countries incorporated his ideas into concrete measures, significantly reducing flood disasters and improving the river environment. In particular, Dr. Takahasi recommended in the UN report on the 1991 Bangladesh cyclone and storm surge, which caused approximately 140,000 casualties, that provision of information on evacuation and preparation of shelters were more important than construction of banks in that region. His recommendations were implemented with Official Development Assistance by several countries. As a result, the number of casualties from the 2007 storm surge disaster of the same magnitude in that area was confined to about 4,000.

In 2009, the International Journal of Water Resources Development, the most authoritative journal in the field of water resources, applauded Dr. Takahasi for his enormous contribution towards water resources management and flood control across the Asian monsoon region, in its first ever article featuring an individual.

Dr. Takahasi thoroughly reexamined the policies in Japan that had relied solely on physical infrastructure such as banks and dams, and ultimately established a globally applicable concept of river basin management in a frame of a social system, that includes such as rainwater storage, infiltration technology, and information systems. Furthermore, Dr. Takahasi developed his concepts into concrete measures internationally, thereby contributing to the peace and prosperity of our society through the reduction of water-related disasters. It is for these outstanding achievements that Dr. Takahasi is deemed most eminently deserving of the 2015 Japan Prize given to honor contributions in the fields of “Resources, Energy and Social Infrastructure”.