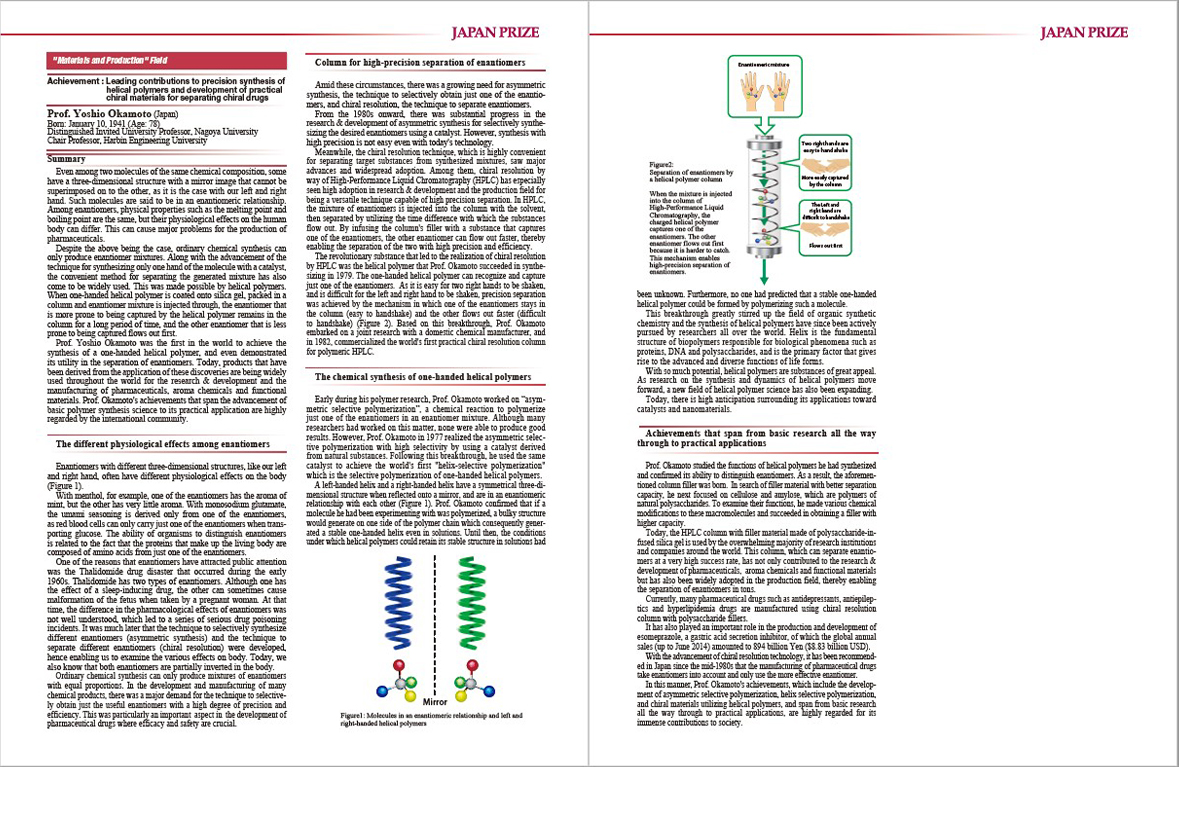 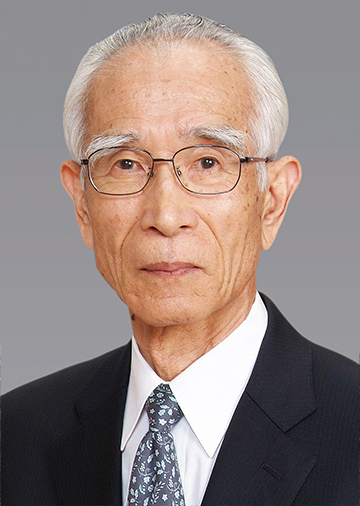 Prof. Yoshio Okamoto has contributed enormously to the development of basic science and industry by establishing the groundbreaking concept of asymmetric polymerization for the creation of a helical polymer, and developed the results into a practical separation method for optically active drugs.

Prof. Okamoto established the concept of asymmetric polymerization, which is the synthesis of optically active macromolecules from optically inactive monomers.

In 1977, he achieved the polymerization of just one optical isomer from the racemic vinyl monomer (a mixture equivalent to optical isomers) with high selectivity (over 90%). He then succeeded in the selective synthesis of helical polymers in their optically activeform, that are stable and completely unidirectionally wound even in solutions, from optically inactive vinyl monomers.

While helical structures are commonly found in biopolymers such as DNA and proteins, at the time, there was not even a theoretical prediction on how a polymer with no optically active group could retain a stable helical structure in a solution. Therefore, this discovery had a great impact not only on the field of chemistry but also on surrounding disciplines.

In the past, the typical method for separating optical isomers was to recrystallize as salt with existing optically active substances. Asymmetric synthesis to synthesize only the necessary optical isomer has been developed, but both methods required fine-tuning for each target molecule.

Meanwhile, Prof. Okamoto, in 1981, succeeded in the efficient separation of various optical isomers, which had been deemed extremely difficult until then, by filling the column with an optically active helical polymer that he had developed, and circulating the mixture of optical isomers.

With this method, a single column could be applied to various target molecules, making it highly versatile.

Based on his academic breakthrough, Prof. Okamoto carried out collaborative research with a company, and in 1982, succeeded in developing the world’s first practical application of the polymeric chiral column.

In addition, Prof. Okamoto searched for a better filler, and in 1984, chemically modified polysaccharides such as cellulose and amylose, which are naturally occurring optically active macromolecules. As a result, he developed the chiral filler that is now most widely used by companies and universities around the world.

Since a living body shows high discrimination ability against optical isomers, obtaining a single optical isomer (chiral drug) is essential for creating drugs that have high efficacy but no side effects. By using the chiral filler developed by Prof. Okamoto, it is even possible to separate chiral drugs in tons.

The chiral separation business based on this technology now has bases established in five countries across Europe, America and Asia, and is enabling researchers from all over the world to reap its benefits.

In this way, the technology that originated from Prof. Okamoto’s basic research, which was then adapted for practical application through applied research, has since contributed enormously to the creation of pharmaceuticals and other chiral substances.

It is for these significant contributions in the field of “Materials and Production” that Prof. Yoshio Okamoto is deemed most eminently deserving of the 2019 Japan Prize.