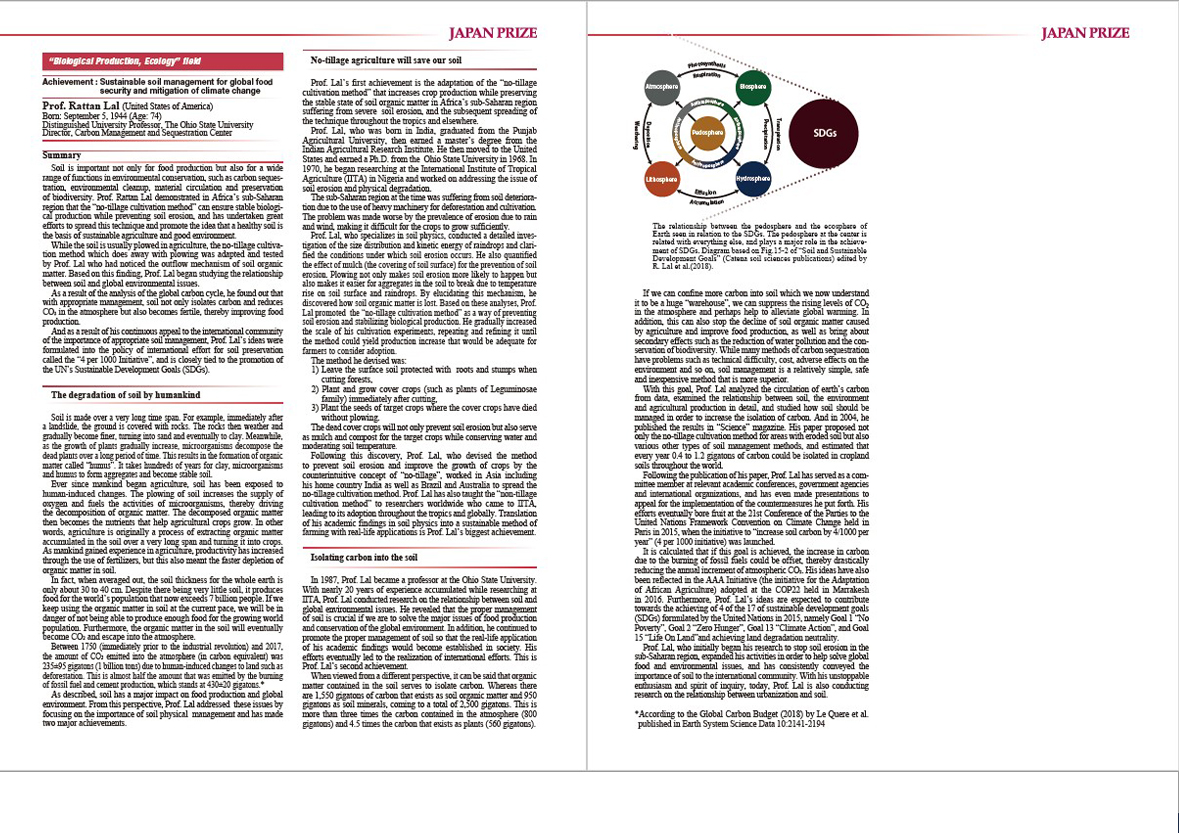 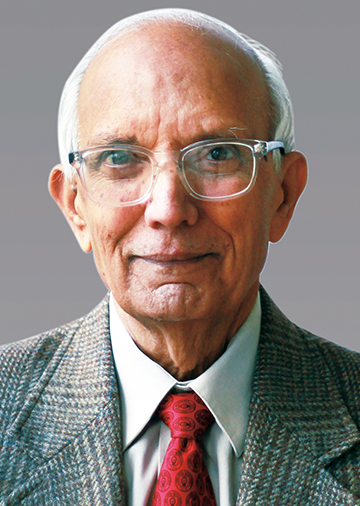 Prof. Rattan Lal has been successful in identifying technological options adapted to various ecosystems through his intensive basic and applied research on processes and factors of soil degradation caused by inappropriate biological production , as well as in evaluating recommended agricultural practices which reduce risks of soil degradation and of anthropogenic climate change while improving the environmental quality and addressing the critical issues of feeding the earth's population, which is expected to reach 9.8 billion by 2050.

Prof. Lal initiated research experiments on the use of no-till systems ( based on mulch farming, cover cropping and planted fallows) of soil management in 1970, and evaluated their effects on water runoff, soil erosion, structural stability, water infiltration rate and conservation ,and soil temperature moderation for sustainable agronomic production in fragile soils and harsh climate of agroecosystems in sub-Saharan Africa. He integrated these options with diverse methods of land clearance, and promoted the adoption of these technologies throughout the tropics and globally with the objectives of developing sustainable systems which save land and reduce the need for tropical deforestation.

Prof. Lal also documented that rapid decline in soil organic carbon concentration following deforestation and plow-based tillage was critical to degradation of soil structure, crusting and compaction, acceleration of soil erosion, and emission of greenhouse gases into the atmosphere. Therefore, he promoted the concept of restoring soil organic carbon concentration for sustainable management of soils of agro-ecosystems, and identified soil carbon sequestration as an important strategy of off-setting anthropogenic emissions and adaptation and mitigation of climate change .He has globally promoted the concept of sustainable soil management for sequestration of atmospheric carbon dioxide as soil organic matter and making improved agriculture as an important solution to addressing climate change . In this regards, Prof. Lal globally documented and promoted the concept of soil organic carbon management and sequestration as critical to achieving food and nutritional security, and adaptation and mitigation of climate change.

The philosophy underlying Prof. Lal’s ideas is also closely aligned with the Sustainable Development Goals of the United Nations, namely Goals 1 and 2 “No Poverty” and “Zero Hunger”, Goal 13 “Climate Action”, and Goal 15 “Life On Land” and “ Land Degradation Neutrality ”.Further, this concept is also reflected in the “4 per 1000 (mille)” initiative (efforts to increase soil carbon by 4‰ per year), which was launched at the 2015 United Nations Framework Convention on Climate Change held in Paris, and in the AAA(Adapting African Agriculture) initiative proposed at the COP22 in Marrakech.

These accomplishments indicate that Prof Lal has not only pursued the principles of natural sciences and the adoptions of its technological applications in society, but has also demonstrated to society the importance of soil, which sustains biological production and affects the global environment. While enlightening the general public on this issue, he has also supported policy makers for international efforts in soil restoration, and translation of soil science into action by working with the IPCC, Global Soil Week, Global Soil Partnership, FAO, UNCCD, UNU-FLORES, GCHERA and the International Union of Soil Sciences.

It is for these significant contributions in the field of “Biological Production, Ecology” that Prof. Rattan Lal is deemed most eminently deserving of the 2019 Japan Prize.