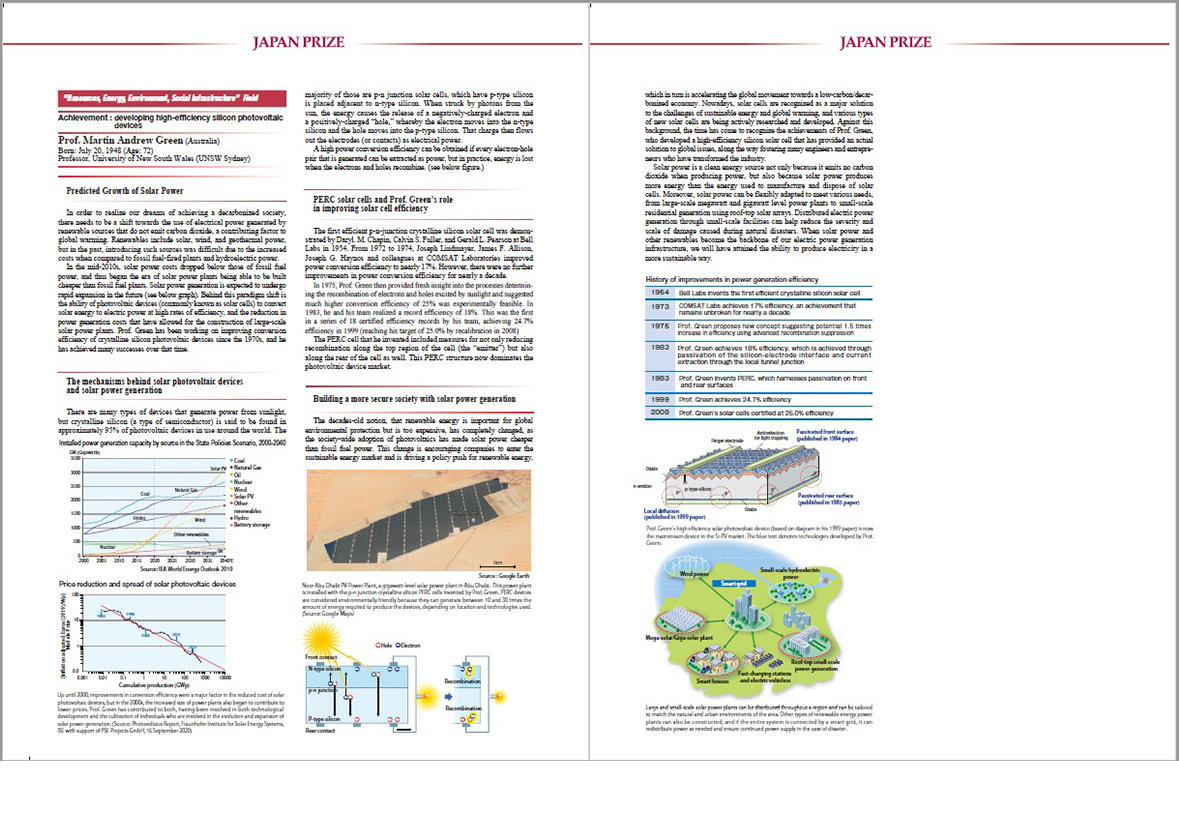 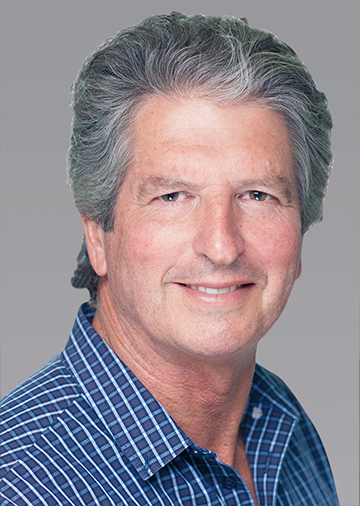 Professor Martin Green has pioneered the development of high-efficiency silicon photovoltaic devices and contributed significantly to the realization of solar power that is now cheaper than thermal power. Especially, he made great achievements in increasing power conversion efficiency dramatically from around 17% to 25% by innovating advanced technologies and integrating them into practical devices that now make the transition to a low-carbon society realistic. He has also trained the researchers and entrepreneurs who have played key roles in industrial development and in reducing the price of silicon photovoltaic devices.

The first efficient crystalline silicon solar cell was demonstrated by Daryl. M. Chapin, Calvin S. Fuller, and Gerald L. Pearson at Bell Labs in 1954. From 1972 to 1974, Joseph Lindmayer, James F. Allison, Joseph G. Haynos and colleagues at COMSAT Laboratories improved conversion efficiency to nearly 17%. However, there were no further improvements in conversion efficiency for nearly a decade. Professor Green then provided fresh insight into the processes determining the recombination of electrons and holes excited by sunlight and suggested much higher conversion efficiency of 25% was experimentally feasible. In 1983, he and his team realized a record efficiency of 18% by introducing a thin oxide layer between the electrode/silicon junction on the front of the cell that extracted the charges by quantum mechanical tunneling while suppressing recombination. This was the first in a series of 18 certified efficiency records by his team, achieving 24.7% efficiency in 1999 (reaching his target of 25.0% by recalibration in 2008). The PERC cell that he invented included measures for not only reducing recombination along the top region of the cell (the “emitter”) but also along the rear of the cell as well. This PERC structure now dominates the photovoltaic device market. Along with improved efficiency, mass production and cost reduction have been essential for large-scale installation of solar cells. Professor Green, who fostered many of the founders of a new wave of low-cost solar cell manufacturers, has also made significant contributions to the industrialization of photovoltaics.

The decades-old notion, that renewable energy is important for global environmental protection but is too expensive, has completely changed, as the society-wide adoption of photovoltaics has made solar power cheaper than thermal power. This change is encouraging companies to enter the sustainable energy market and is driving a policy push for renewable energy, which in turn is accelerating the global movement towards a low-carbon/decarbonized economy. Nowadays, solar cells are recognized as a major solution to the challenges of sustainable energy and global warming, and various types of new solar cells are being actively researched and developed. Against this background, the time has come to recognize the achievements of Professor Green, who developed a high-efficiency silicon solar cell that has provided an actual solution to global issues, along the way fostering many engineers and entrepreneurs who have transformed the industry.

Professor Martin Green's original and pioneering achievements in the development of high-efficiency silicon photovoltaic devices, which have greatly contributed to the advancement of science and technology and led to the world-wide installation of this renewable energy, are therefore deemed most eminently deserving of the 2021 Japan Prize in the fields of "Resources, Energy, Environment, Social Infrastructure."