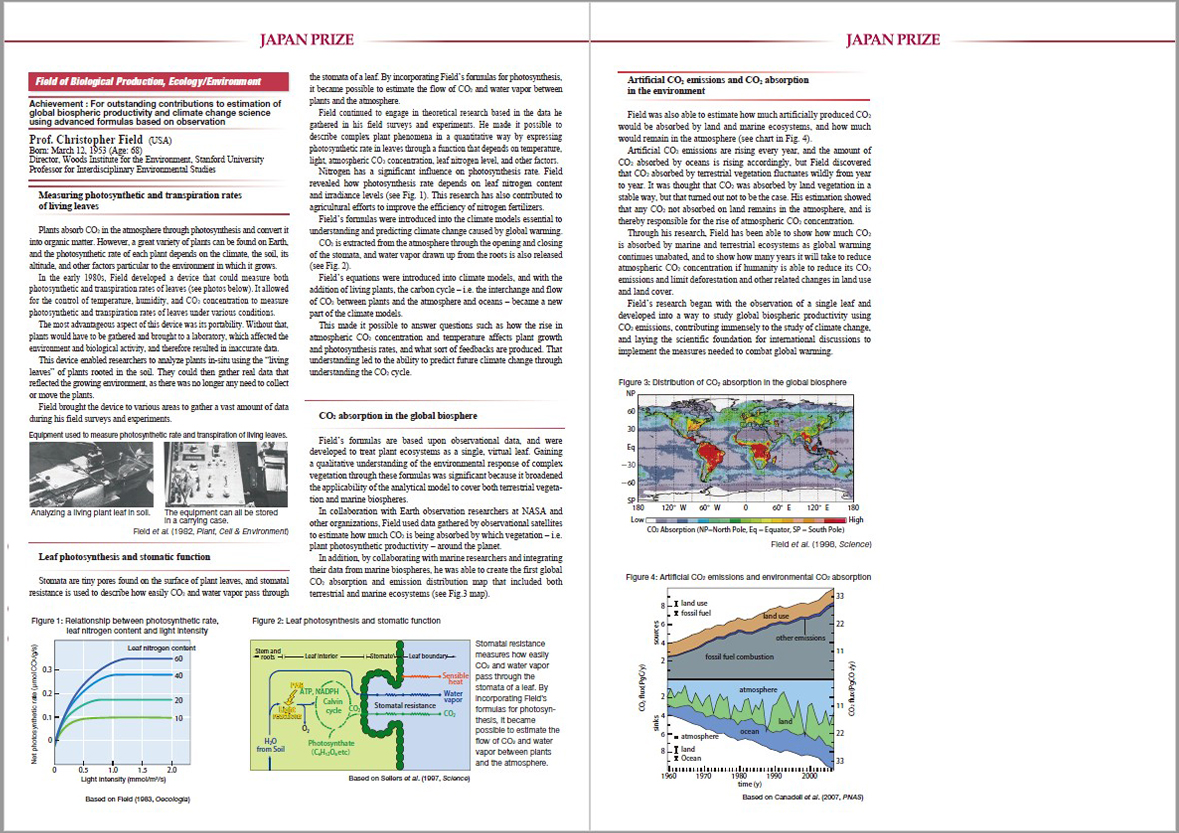 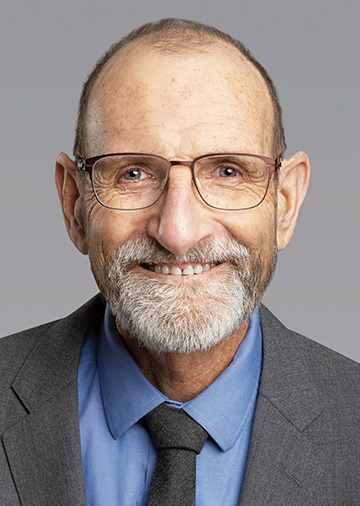 Living organisms demonstrate great diversity, and each responds to environmental change in different ways dependent on their type and habitat. Dr. Christopher Field has been driving theoretical research into photosynthesis, plant growth, and other aspects of plant physiology and population structure based on leaf-scale field observations. In doing so, he has been able to formulate the complex environmental response of living organisms by introducing the idea that the optimal use of light, nitrogen, and other resources is an important survival strategy. This idea led to the development of the “Big-leaf Model” (a fundamental formula for photosynthetic production and transpiration which considers a plant ecosystem as a single virtual leaf) and later led to the standardization of the land surface model.

Field developed a device that can measure photosynthetic rate and transpiration of individual living leaves. He continues to accumulate data through field surveys, and has used that to show how the photosynthetic rate in leaves depends not only on temperature and light environments, but also on atmospheric CO2 levels and on in-plant nitrogen concentration distribution. Field’s findings showed the relationship between plant population structures and productivity optimization. This allowed for the creation of a formula showing photosynthetic rate and water utilization efficiency dependent on various environmental conditions, and has also contributed to agricultural efforts to improve the efficiency of how nitrogen fertilizers are used. It has made it possible to estimate how much CO2 vegetation absorbs and emits under different climate conditions. Additionally, in collaboration with satellite-based Earth observation researchers at NASA and other organizations, Field’s research led to the world’s first estimate of the global distribution of net biospheric production on both land and sea, and the first successful identification of large annual fluctuations in net carbon absorption in terrestrial ecosystems, and identification of the factors that increase CO2 concentration in the atmosphere.

Moreover, Field’s formulation allowed for the atmospheric general circulation model (GCM) to be introduced for land surface processes, and made it possible to predict future climate change (including the carbon cycle) while considerating improvements in photosynthetic efficiency and increase in vegetation growth associated with increases in CO2 concentration. With the reduction of artificial carbon dioxide emissions becoming an international concern, it has now become possible to quantitatively estimate the impact of efforts to mitigate the continued warming of the planet by increasing CO2 absorption through the use of forestation and marine ecosystems. The Paris Agreement is an international framework aimed at dealing with global warming that entered into force in 2016, and it too was built on the wealth of global warming research Field has led over the years, and will play a notable role in climate change research and in the planning of countermeasures.

Without Field’s research into global biospheric productivity fusing experimental research, field surveys, satellite data, and climate models, the current international science-based policy debate on measures to combat climate change would not have been possible. It is for these reasons that Dr. Christopher Field has proved to be the deserving recipient of the 2022 Japan Prize celebrating his achievements in the fields of Biological Production, Ecology, and the Environment.